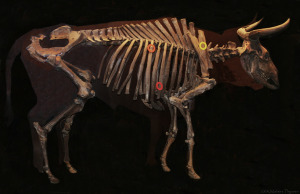 It’s not often that we get to hear about people working on a scientific project previously instigated by Hitler and the Nazi Party of Germany… though this is thankfully a far more benign application of eugenic theory than the atrocities of the Second World War. Italian scientists are trying to recreate the auroch, an extinct breed of European mega-cattle, by selective “back breeding” and genetic analysis [via SlashDot; image courtesy Wikimedia Commons]:

“We were able to analyse auroch DNA from preserved bone material and create a rough map of its genome that should allow us to breed animals nearly identical to aurochs,” said team leader Donato Matassino, head of the Consortium for Experimental Biotechnology in Benevento, in the southern Campania region.

“We’ve already made our first round of crosses between three breeds native to Britain, Spain and Italy. Now we just have to wait and see how the calves turn out.”

The last animal disappeared from the British Isles in the Iron Age and the breed was declared extinct in 1627 after a female died in the forests of Poland.

Aurochs are depicted in ochre and charcoal in paintings found on the walls of cave galleries such as those at Lascaux in France and Altamira in Spain. Caesar described them in The Gallic Wars as being “a little below the elephant in size” and a favourite hunting prey for wild Germanic tribesmen.

Their abiding mystique means they remain as the symbol of several states and cities in Europe, having figured prominently in Teutonic folklore. In ancient times, killing an auroch was seen as a great demonstration of courage, with the horns turned into silver-clad drinking cups.

Exactly why we need to recreate a breed of cows with the size and temperament of a rhinocerous isn’t abundantly clear, and some researchers suggest that the back-breeding process will produce animals that, while they may look the part, are inevitably very different from the original aurochs at a genetic level. But then it probably won’t be more than a decade or so before we can reliably clone animals from archived DNA samples, Jurassic Park style.

Perhaps retro-engineered auroch hunting will become the European equivalent of the rich man’s African safari holiday? I’d be right behind that idea, on the proviso that the would-be hunters were obliged to use the weapons of the Middle Ages in their attempts to bag a trophy… 😉