You must have seen this one already, but just in case: Bill Clinton raises the idea of independent “agency for truth” to counter all the misinformation on the intertubes [via everywhere, but I got it from TechDirt].

The agency, Clinton said, would “have to be totally transparent about where the money came from” and would have to be “independent” because “if it’s a government agency in a traditional sense, it would have no credibility whatever, particularly with a lot of the people who are most active on the internet.”

“Let’s say the U.S. did it, it would have to be an independent federal agency that no president could countermand or anything else because people wouldn’t think you were just censoring the news and giving a different falsehood out,” Clinton said.

“That is, it would be like, I don’t know, National Public Radio or BBC or something like that, except it would have to be really independent and they would not express opinions, and their mandate would be narrowly confined to identifying relevant factual errors” he said. “And also, they would also have to have citations so that they could be checked in case they made a mistake. Somebody needs to be doing it, and maybe it’s a worthy expenditure of taxpayer money.”

Hmmm. File under “nice idea, but naive and completely impractical given that the authoritarian approach to truth is antithetical to the way the internet works”. Heck, you could make it as transparent as spun diamond, and there’d still be conspiracy theorists claiming that the secret chains of funding and misinformation were just brilliantly concealed. It’s a tricky post-modern conundrum which I suspect will only ever be solved some sort of universal realisation that checking things out for yourself is the route to the truth.

Which is to say it’ll probably never be solved at all for most people. Selah.

That said, this totally merits the use of a classic macro: 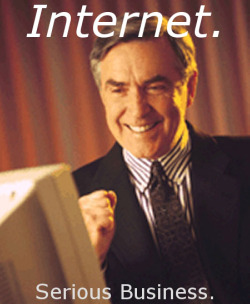 Once again, research results seem to reinforce the oldest aphorisms in the book… which would be more gratifying, perhaps, if they weren’t the aphorisms we tell to commiserate over the fundamental brokenness of the social and political systems we inhabit. It turns out that nice people are far more likely than nasties to ascend to a position of power and authority… but once they get there, that power corrupts them, and they become reckless, selfish and unpleasant [via BigThink]. Who knew?

“It’s an incredibly consistent effect,” Mr. Keltner says. “When you give people power, they basically start acting like fools. They flirt inappropriately, tease in a hostile fashion, and become totally impulsive.” Mr. Keltner compares the feeling of power to brain damage, noting that people with lots of authority tend to behave like neurological patients with a damaged orbito-frontal lobe, a brain area that’s crucial for empathy and decision-making. Even the most virtuous people can be undone by the corner office.

Why does power lead people to flirt with interns and solicit bribes and fudge financial documents? According to psychologists, one of the main problems with authority is that it makes us less sympathetic to the concerns and emotions of others. For instance, several studies have found that people in positions of authority are more likely to rely on stereotypes and generalizations when judging other people. They also spend much less time making eye contact, at least when a person without power is talking.

Turns out it’s all about self-justification:

In a recent study led by Richard Petty, a psychologist at Ohio State, undergraduates role-played a scenario between a boss and an underling. Then the students were exposed to a fake advertisement for a mobile phone. Some of the ads featured strong arguments for buying the phone, such as its long-lasting battery, while other ads featured weak or nonsensical arguments. Interestingly, students that pretended to be the boss were far less sensitive to the quality of the argument. It’s as if it didn’t even matter what the ad said—their minds had already been made up.

This suggests that even fleeting feelings of power can dramatically change the way people respond to information. Instead of analyzing the strength of the argument, those with authority focus on whether or not the argument confirms what they already believe. If it doesn’t, then the facts are conveniently ignored.

Sound familiar? As in, remind you of pretty much every director or upper-echelon manager you’ve ever worked for, anywhere? Yeah, me too.

Now, how much of that is due to a Stanford Prison Experiment type of situation, i.e. people playing up to an arbitrary role as it is defined in the collective subconscious (we know bosses act like ass-hats, so when we’re told to play the boss, we act like an ass-hat), and how much of it is due to some genuine qualitative difference in perception that comes from being elevated into a more exclusive and powerful cadre or subsection of a social group?

[ The irony of this article appearing in the Wall Street Journal is almost palpable. I can just imagine loads of investment bankers reading it, tutting quietly and shaking their heads, doubtless reminded of someone that little higher up on the pyramid than themselves. Oh, how the mighty have fallen, hmm? ]

This month in Blasphemous Geometries: the life-span of the Bush administration has seen an astonishing proliferation of super hero cinema.

Jonathan McCalmont compares the rhetoric of American foreign and domestic policy with the thematic underpinnings of the super hero movie genre, and explains why he’ll be as glad to see the back of costumed crusaders as he will the back of Bush.

With the Bush era rumbling to a long overdue end, some critics have turned their gin-shortened attentions to the question of which cultural artefact best incapsulates W’s period in office. One popular yardsticks are the ways in which the Presidency has been depicted through film and TV. The Clinton era, for example, has come to be seen as a period of intensely human and libidinous cinematic Presidents such as those of Ivan Reitman’s Dave (1993) and Rob Reiner’s The American President (1995). In fact, were it not for films such as Independence Day (1996) and Air Force One (1997) asserting the President’s penchant for arse-kicking you could be forgiven for forgetting that while Clinton claimed to feel people’s pain, he was no slouch when it came to meting it out in the form of air strikes and deciding, for the first time, that the spread of WMDs was a military matter.

However, while the Bush era has been quick to provide us with Presidents who are either mentally unstable religious zealots (Battlestar Galactica) or bloodless pragmatists more eager to seek revenge than examine the facts (The Sum of all Fears [2002]), the enduring cinematic icon of the Bush era is undeniably the super hero. END_OF_DOCUMENT_TOKEN_TO_BE_REPLACED