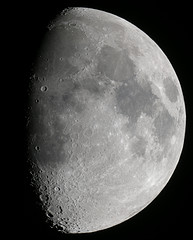 It’s been a while since space exploration was the sole province of national behemoths like NASA, despite the relative infancy of the commercial space sector. A small budget might prevent you from launching human payloads, but there’s still plenty of options at the bottom end of the funding scale… along with some tantalising enticements for an outfit with big dreams.  [image by ComputerHotline]

Romanian company ARCA is one such outfit, and they’re taking a stab at the Google-funded Lunar X Prize using comparatively cheap and simple technology:

… a balloon that can carry ARCA’s European Lunar Explorer (ELE) space probe into the upper atmosphere, eliminating the need for a traditional launch pad and allowing ARCA to launch close to the equator from a sea platform. The “0” pressure balloon design is similar to a giant black hot-air balloon that uses solar energy to heat the air inside, instead of the burner that normal hot-air balloons use.

Once the balloon soars above 11 miles (18 km), the three-stage rocket slung below will fire and boost itself into low Earth orbit. ELE will then travel to the moon and deploy its Lunar Lander, which resembles a knobby rubber ball that uses its own rocket engine to ensure a soft landing.

ARCA’s lander itself isn’t really designed to do much when (or rather if) it arrives on the Lunar surface; because of the way the X Prize is defined, reaching the Moon is more important than achieving anything there. But as with most private space-launch initiatives, it’s all about proof-of-concept – once they know they can make the journey, they can start thinking about what to cart along next time.

Balloon-launch projects always remind me of Zion Cluster from William Gibson’s early novels, which – if I remember correctly – was colonised by exactly this sort of cheap-and-cheerful bootstrap approach. 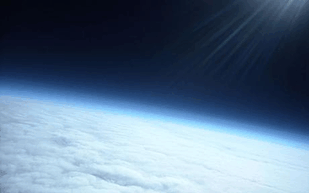 This is really neat, via Slashdot, some Spanish students have sent a camera on a balloon up into the stratosphere, with excellent results:

Taking atmospheric readings and photographs 20 miles above the ground, the Meteotek team of IES La Bisbal school in Catalonia completed their incredible experiment at the end of February this year.

[from the Telegraph, via Slashdot]

How does this sound for a headline:

A retired French army colonel is preparing to make a record-breaking attempt…to complete a 1000mph skydive from the edge of space.

So far, to my knowledge, he’s been unable to make this jump because of poor weather conditions, but you can’t blame him, considering how he’s going to go about doing it:

The mission involves ascending in a pressurised capsule suspended from a helium balloon for two and a half hours to the edge of the stratosphere.

and the risks involved:

A re-enforced crash helmet will protect his ears from the thunderous sonic boom he will create as he breaks the sound barrier.

I hope this turns out well, and maybe sets a precedent for astronauts and extreme sports adventurers.  If it does work out, it seems like a definite trend for the future. 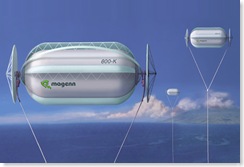 Well, not figuratively, anyway.  Everyone knows* that wind is stronger the higher up you go, so why not get higher to make use of those high speeds?  Well, constructing a 600-ft. base isn’t all that easy to do for one.  Enter the Magenn Air Rotos System (MARS), a giant sausage-shaped balloon fitted with rotors to generate power.  It sounds like a wild idea, but other companies are developing similar technology as well.

A small test version is currently underway, with hopes to build small-scale models for industrial use first, then building up to megawatt generators.