Yet another post where I pretty much point you in the direction of a long-form piece elsewhere and say “go read”*; Wired UK is running an article on the imminent boom in mobile technologies in Africa.

Africa seems to be leapfrogging over the cable-infrastructure phase of internet adoption and going straight to the handset-centric model… and given the continent’s economy has continued to grow while the rest of the “developed” world has languished in recession, it’s not daft to imagine that the big developments in handset-as-platform will be happening there first. And given the causes of that afore-mentioned recession, peer-to-peer banking systems backed with a useable commodity (in this case airtime) are something we should surely be keeping a close eye on…

The devices have supplanted not just the country’s fixed-line telephony industry, but also the manner in which money is spent. Companies led by Vodafone’s mobile-payments giant M-PESA have filled the vacuum left by the moribund local banks in a country in which, according to the World Bank, around half the population live under the $1.25 (77p)-per-day poverty line. One such company is PesaPal, a web-and mobile-payment platform set up by Agosta Liko, 35, that integrates with Kenya’s main mobile-payment services.

M-PESA (M for mobile; “pesa” is Swahili for money) emerged from a joint project between the UK’s Department for International Development and local operator Safaricom. Its model was to use the existing network of mobile-credit sellers that had sprung up in petrol stations, general stores and bars across the country. People were already exchanging airtime as a way of transferring money. M-PESA formalised the value exchange, turning thousands of sales agents into micro bank branches and millions of mobile phones into wire-transfer services. Users can store up to 50,000 shillings (£350) in their account, with Safaricom taking a transaction fee of between 30 and 150 shillings whenever a user sends money. In 2010 there were 9.5 million M-PESA accounts, compared to 8 million traditional bank accounts in Kenya.

On a similar note, the Stateside version of Wired reports that PayPal are making their own move into the mobile payments sphere with an Android app that will let you transfer money by tapping two enabled phones together. Exactly what use that will be in countries where person to person transactions have become rare and inherently suspect, I have no idea – perhaps that situation will be reversed somewhat by these developments? – but it’s a sufficiently striking bit of symbolism that I want to buy something off some random phone-toting stranger right now, just so I can try it out.

[ * Oh, you want excuses? Well, I have a fuzzy head from what I suspect will be a festival-season plague caught from one or another of my friends who went to Sonisphere. And, um, I may be reading a lot of stuff about EVE, which is pretty fascinating down-the-rabbithole stuff. So, yeah. There you go. ]

There’ll probably be plenty more incidents like this as time goes by: copying code is a pretty easy thing to do (even if avoiding detection isn’t) and the temptation of an investment-bank-level income is surely enough to justify the attempt to someone with a big enough greed-on (which is presumably a given in the industry in question). If only some egalitarian copyleftist hacker type would pilfer those algos and post ’em to Wikileaks… the anger and frustration of investment bankers would be reward enough for me, had I the pertinent skills. Hell, I think I could probably even ride out the entire jail term with a shit-eating grin on my face.

Interesting side-note: stealing this sort of software is illegal, even though the software itself may be considered to provide an illegal advantage to its owners. 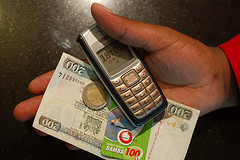 Many places across the planet lack basic commercial infrastructure. Kenya is serving as a case study of how banking by mobile phone seems to fill (or leapfrog?) the gaps. Since a phone-text bank service called M-PESA was introduced in 2007, almost 40% of Kenyan households have one user, while only 22% of adults have traditional bank accounts.

M-PESA charges fees for transfers, and doesn’t pay interest on savings. It might, though, spur development by making it easier to move capital around. The impact of the system is being watched by Tavneet Suri (MIT/Sloan) and William Jack (Georgetown U.).

In a 2008 survey of 3,000 households in areas representing 92% of Kenya’s population, Suri and Jack found that despite M-PESA’s fees, large numbers of Kenyans are using it for basic banking functions. About 38% of money transfers originated in rural areas. According to Suri, farmers are one group that employs the technology to lend each other money in lean times.

“Many of these people work in agriculture where you have highly variable incomes because of the weather,” explains Suri. “That means banks also don’t want to lend to them because the risk is much higher. So people insure risk, by making informal agreements: ‘I’m going to lend you money if you need it.’ And if you were not able to feed your family, you would receive transfers from people in your network. This happens in a lot of developing countries.”

The researchers’ data also shows that 41% of M-PESA money transfers are sent to parents, and only 8% to children, which also strongly suggests that M-PESA fills a classic role in a developing economy; children who leave home to work may be sending money back to help their parents.

The physical separation of people has always made money transfers difficult in developing countries, however, notes Suri, a Kenya native whose family lives outside Nairobi, the capital. Sending money from one place to another has often been “hard to do, costly, not very safe. You might send money with a bus driver and it wouldn’t get there, because he might get robbed. Now it gets there within five seconds, as soon as it takes a text message to arrive.”

And despite their inability to earn interest, Kenyans appear to use M-PESA as a savings tool. In a current working paper summarizing their results, “Mobile Money: The Economics of M-PESA,” Suri and Jack note that 77% of Kenyans say they keep money “under the mattress” at home, so to speak. About 11% of households say they have had savings stolen or become lost, though, meaning that tucking cash away is a money-losing strategy. By contrast, under 2% of M-PESA users believe they have lost money through the system (by sending it to an unintended recipient). That means Kenyans without access to banks should, on aggregate, retain more of their savings through M-PESA.

The next wave of research will look at whether M-PESA really does speed the spread of capital. Freeing up small packets of wealth makes a difference where it’s needed, as Nobel Prize winner Muhammad Yunus, or Heifer International, can attest. (And maybe writers, artists, or musicians, wherever they are, need to see if they can get their 1,000 fans on Twitpay.)

[Mobile Phone With Money in Kenya by whiteafrican]

Remember that story we ran a few weeks back about the alleged theft of the Goldman-Sachs automated trading code?

Well, thanks to said case, Goldman-Sachs and the high-frequency automatic trading (HFT) practices that they dominate are increasingly sliding into the spotlight of Congressional scrutiny, so Ars Technica have knocked up a brief guide to what it’s all about. If you thought “the markets” were those guys in suits shouting at each other on the trading room floor, think again. [image by Coffee Maker]

If you look under the hood of the markets in 2009, you’ll find that the trading floor has been replaced by electronic networks; the frantic, hand-signaling traders have been replaced by computer systems; and all of moves in the trader’s dance—a thousand little tricks and techniques (some legal, some questionable, and some outright illegal) for taking regular advantage of speed, location, and information to generate profits—are executed hundreds of times per second, billions of times per day. And the whole enterprise is mainly powered by the same hardware from Intel, AMD, and NVIDIA, that Ars readers use for gaming.

Only about three percent of the trading volume on the NYSE is actually carried out by means of traditional “open outcry” trading, where flesh-and-blood humans gather to buy and sell securities. The other 97 percent of NYSE trades are executed via electronic communication networks (ECNs), which, over the past ten years, have rapidly replaced trading floors as the main global venue for buying and selling every asset, derivative, and contract. So the ECNs are the markets in 2009, and those pit traders who pose for the cameras are mainly there for the cameras.

In other words, Josephine Average Stock-Trader is going head to head with supercomputers every time she dips a toe into the game. The ECN algorithms specialise in making millions of tiny trades, each making fractions of pennies of profit – small beer when considered in isolation, but big profits when scaled up to the sheer volume of transactions that these systems can handle.

It’s like a vast virtual ecosystem of predatory code-critters; go find out more about it. Know thy enemy, and all that.