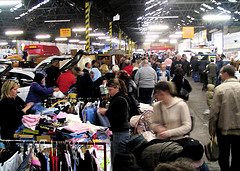 If you think your local economy’s in a mess, just be thankful you’re not living in Russia, where it appears that big corporations are turning to barter trade in a desperate attempt to keep business moving:

So far, economists doubt that barter will grow to the level it reached in the 1990s. Earlier in the transition to a market economy, industrialists still had little monetary stake in their businesses but were dependent on the prestige that went with executive positions, said Andrei Yakovlev of the Higher School of Economics here. They had little incentive to cut costs, and barter deals kept them going for five years, he said.

Now, business owners and managers “are really trying to reduce costs and reduce inefficiency,” Mr. Yakovlev said. Interest in barter, he said, is more likely to come from regional governments, which have the most to lose from high unemployment.

Local government moving towards barter is a little scary… but then a bit of decentralisation might not be a terrible thing if it means that, in the long run, the system becomes more resilient to global clusterfucks like the subprime collapse.

Meanwhile, there are other comparatively recent examples of communities surviving without the assistance of banks – the Irish bank strike of the early seventies, for example. And the sheer amount of coverage being given to alternative currencies and financial systems in places where economics is not traditionally the foremost subject of interest speaks volumes for the overnight erosion of trust in banking as we know it. [image by shawnchin]

What will we build in its place as we move into John Robb’s global guerilla century?