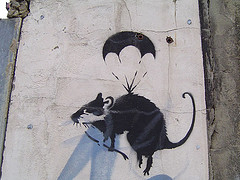 It’s almost as if – despite our advancing technologies – all the health risks we considered dead and buried are coming back again. You’ve probably already heard about the resurgence of tuberculosis, but you might not have heard about the Bartonella bacteria, a newly emerging family of zoonotic pathogens – in other words, bacteria transmitted by rat fleas that have the potential to cause a variety of maladies in human beings, from serious heart disease to nervous system infections. [image by yaraaa]

All we need right now is a new plague, on top of everything else we have to deal with. But then again, Bird Flu was the new plague a few years ago, and despite all the yammering and media panic nothing really happened at all… [story via MetaFilter]