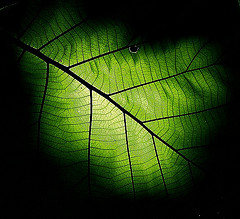 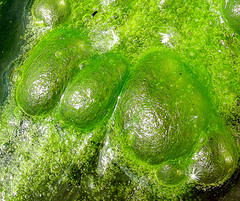 Alternative fuels is an industry crawling with big promises, but they don’t come much bigger than this one: one billion gallons of carbon-neutral biofuel per year. Made from algae.

That’s the promise from Sapphire Energy, which is positioning itself to lead an emerging industry by working with airlines on test flights and ramping up its production facilities in New Mexico. If all goes as planned, the company says, it will be in the position to supply one million gallons of biofuel annually by 2011, 100 million gallons annually by 2018 and one billion gallons each year by 2025.

That’s all well and good, but biofuels are just another thing for us to burn for energy – what’s the big difference?

Another big benefit: algae sucks up lots of CO2. According to the Biodiesel Times, algae-based biofuel is considered carbon neutral because CO2 generated in its use is offset by what’s consumed during production.

OK, good. But here’s the bit that really struck me:

While Sapphire’s high-profile aviation tests have gotten the headlines, the company says that because its biofuel is a “drop in” fuel chemically identical to crude oil, it is compatible with anything on the road or in the air right now. It also plays nicely with existing refineries and pipelines. That’s another benefit over ethanol, which is corrosive and typically transported to terminals via truck or rail and then mixed with regular gasoline.

“We are 100-percent convinced that the only way to address climate and energy security is to use the same infrastructure we already have,” Sapphire’s Zenk said.

Now that’s a little more interesting. I don’t have the data or expertise to run the numbers on this sort of thing (is there a quant in the house?) but a replacement for mineral oils that wouldn’t require a huge investment in new peripherals has got to be worth looking into. Of course, as the article points out, it’ll take certification and industry take-up to make algal biodiesel truly viable as an industry, but it’s reassuring to see companies like Sapphire are thinking of the bigger picture. [image by Lee Nachtigal]

But maybe that’s the siren song of the easy option we’re hearing – would we really be better off keeping the systems we have, or should we be overhauling the entire global infrastructure of fuel production from the ground upwards? 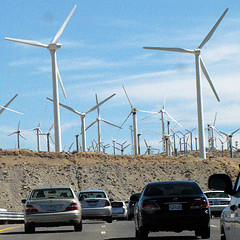 Prof Mark Jacobson of the University of Stanford believes that (for the USA) the best solution to the various problems of energy security, peak oil, and global warming lies in wind and solar thermal power:

The raw energy sources that Jacobson found to be the most promising are, in order, wind, concentrated solar (the use of mirrors to heat a fluid), geothermal, tidal, solar photovoltaics (rooftop solar panels), wave and hydroelectric.

In Prof Jacobson’s research paper he looks at how you could power every road vehicle in the USA using different methods and finds the best combination is wind power and electric battery vehicles. 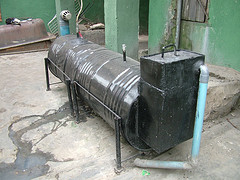 Ever since I read Ian McDonald’s River of Gods, I’ve looked at India from a futuristic, economically oriented perspective to understand how the lives of millions of Indians are being changed by technology.  While the cosmopolitan metropolisis of Dehli and Bombay have undergone enormous growth in the last centry, the more interesting changes have happenned among the rural populations.  Now, with natural gas prices at an all time high, India is turning to Nature, and the sacred cow for a wholly low-tech solution to their problem. The biogas generator looks set to be the tipping point for cheap, renewable energy for India’s villages. [image by 1village]

Quite simply, a biogas generator is a system that utlizes the gas byproduct of the anaerobic digestion of organic materials for heat and/or flame. These generators, like the one featured in the picture above use manure and organic waste materials to produce methane, which is piped from a central tank via pipes, and can be used by an entire village. 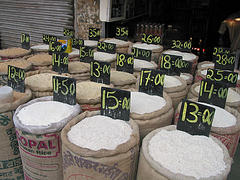