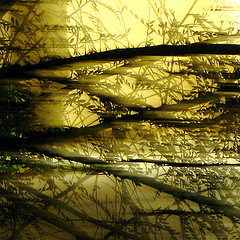 Biomimetics: design solutions from the natural world. Futurismic has covered this kind of thing before, but the examples we’ve blogged about were relatively intuitive.

Iridescent beetle shells as inspiration for a photonic crystal? Fine. Robotic dragonflies for surveillance solutions? Okay. But the appendages of a humpback whale as inspiration for wind turbine design? Bit of a creative leap, surely?

Those knobby flippers were long considered one of the oddities of the sea, found on no other earthly creature.

But after years of study, starting with a whale that washed up on a New Jersey beach, Frank Fish thinks he knows their secret. The bumps cause water to flow over the flippers more smoothly, giving the giant mammal the ability to swim tight circles around its prey.

What works in the ocean seems to work in air. Already a flipperlike prototype is generating energy on Canada’s Prince Edward Island, with twin, bumpy-edged blades knifing through the air. And this summer, an industrial fan company plans to roll out its own whale-inspired model – moving the same amount of air with half the usual number of blades and thus a smaller, energy-saving motor.

So, there you have it – appropriately-named university professor finds application for cetacean hydrodynamics.

Fans of one of Terry Pratchett’s early comic science-fiction novels The Dark Side of the Sun, will be familiar with the idea of robotic versions of insects being used as “bugs” to spy on people.

This is an idea that is being enthusiastically embraced by the US military, with many small UAVs in development for surveillance purposes.

And there is even more insect-themed biomimicry on it’s way from the labs: the dragonfly is of particular interest, according to researchers:

Dragonflies are one of few creatures that utilize four independently controlled wings to fly, 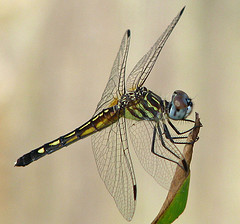 allowing them to hover, dart, glide, move backward, and change directions rapidly. Looking to understand such abilities, scientists at the Royal Veterinary College, in England, and the University of Ulm, in Germany, have developed a robotic dragonfly to measure the current flows over and under the wings at different flap cycles. While most of the dragonfly hovering scenarios were not efficient, the team found that if the lower wings are beating slightly ahead of the top wings, the double set of wings proves more efficient at generating lift, employing 22 percent less power to lift the same weight as a single pair.

Well good luck to them. Fortunately for privacy-lovers/paranoids it seems that practical fabrication of these insect spies is still some way in the future. 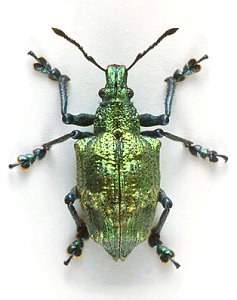 With designers and engineers increasingly turning to the natural world for inspiration, biomimicry is an increasingly important part of the sciences. Author Janine Beynus offers an outline of the discipline’s key principles;

The core idea is that nature, imaginative by necessity, has already solved many of the problems we are grappling with. Animals, plants, and microbes are the consummate engineers. They have found what works, what is appropriate, and most important, what lasts here on Earth. This is the real news of biomimicry: After 3.8 billion years of research and development, failures are fossils, and what surrounds us is the secret to survival.

As an real-world illustration of biomimetic principles, this morning, Wired‘s Brandon Keim presented a design problem from the field of optical computing;

For decades, scientists have dreamed of computer chips that manipulate light rather than electricity. Unlike electrons, photons can cross paths without interfering with each other, so optical chips could compute in three dimensions rather than two, crunching data in seconds that now takes weeks to process.

For now, though, optical computing remains a dream. The chips require crystals that channel photons as nimbly as silicon channels electrons — and though engineers have been able to imagine the ideal photonic crystal, they’ve been unable to build it.

Earlier this month, a team of American material scientists found a biomimetic solution in the body of Lamprocyphus augustus – a Brazilian weevil. According to the research,

the inch-long Brazilian beetle’s iridescent green scales are composed of chitin arranged by evolution in precisely the molecular configuration that has confounded the would-be fabricators of optical computers.

The “scales’ molecular arrangement, which had the same pattern as the atoms of carbon in a diamond.” So, with real diamonds too dense for the task, and artificial diamonds taking months to construct, the L. augustus scales offer a quick and easy solution.

Of course – as co-author Michael Bartl notes – optical computers won’t use actual weevil scales. The plan is to use the scales as a mould, replacing the chitin with something more suitable for the industrial context.

For someone approaching the issue from a science fictional standpoint, this sent my mind careering down a whole new avenue of speculation. Imagine a world in which Bartl’s mould plan is ineffective. Here, much of the high-end computing infrastructure is entirely dependent on this tiny Brazilian insect.

Our protagonists are rogue entomologists, forced to balance the “bug bounties” offered by the military-industrial complex with the ‘pure’ research of their underfunded university departments. Academic soul-searching, Brazilian protesters, university politics, intellectual property wrangles, and a left-wing subtext. It’s got it all.

Finally, if this whole ‘biomimicry’ thing strikes you as interesting, be sure to check out Janine Beynus’ presentation from TED 2005. She’s a skilled orator, and her TED talk is a really good way of getting your head around the subject.

[Image by Barbara Strnadova at God of Insects]

The RoboSwift is a remote controlled micro airplane with wings that can reconfigure in flight, mimicking the flight characteristics of swifts. There are four “feathers” on each wing that can fold over one another to increase or decrease lift and speed, and a propellor that can turn off and fold against the fuselage for better gliding performance. Cameras in the nose allow the operator to know what the plane’s doing and where it’s going.