If you’re fascinated by bionic limbs and other prosthetic technologies, you’ll want to be checking out Wired‘s gallery of photos showcasing the current state of the art – we’re still a good distance from the uncanny valley in this field, but the actual utility and ergonomics of the designs are reaching a point where their usefulness balances out their clunky appearance. Borrowed from the gallery in question, this here is the “Luke” arm, developed by a company owned by the guy who invented the Segway: 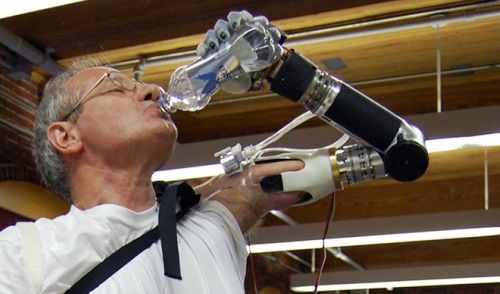 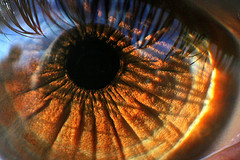 US company Second Sight have developed a bionic eye system that allows a man who has been blind for 30 years to see flashes of light:

He says he can now follow white lines on the road, and even sort socks, using the bionic eye, known as Argus II. It uses a camera and video processor mounted on sunglasses to send captured images wirelessly to a tiny receiver on the outside of the eye.

The Argus II is designed to help sufferers of retinitis pigmentosa, a degenerative eye condition. 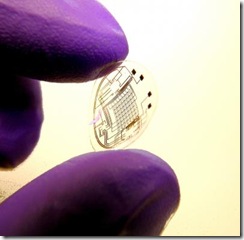 Engineers at the University of Washington have managed to create a flexible, biologically safe contact lens with an imprinted electronic circuit and lights:

There are many possible uses for virtual displays. Drivers or pilots could see a vehicle’s speed projected onto the windshield. Video-game companies could use the contact lenses to completely immerse players in a virtual world without restricting their range of motion. And for communications, people on the go could surf the Internet on a midair virtual display screen that only they would be able to see.

And, the engineers note, people may find many other applications they haven’t even thought of yet. (Via EurekAlert.)

So far only rabbits have worn the prototype, with no ill effects after up to twenty minutes. The engineers plan to add wireless communication to and from the lens, along with built-on solar cells and the capability to use radio-frequency power. The prototype doesn’t light up, but a version with a basic display showing a few pixels could be operational soon. 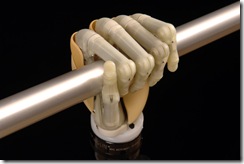 Scottish scientists report that they have produced an artificial arm that is “more powerful than the real thing.” (Via MedGadget.)

According to The Scotsman newspaper:

The researchers say their new arm is capable of repeatedly lifting a weight of 10kg up above head height and could do so all day, compared with the average human being who would tire within minutes. The wrists could rotate 360° and anyone using it could perform hundreds of push-ups.

This raises an ethical question: a patient with such an arm could possibly hurt themselves or someone else. As a result, the arm’s power might actually have to be scaled down.

(Kudos to David Gow, the lead developer, for pointing out in the article something Steve Austin [The Six-Million-Dollar Man of television fame] really should have had to worry about, but never did: “You have to attach it to the patient’s body and that could cause damage if the weight is too heavy. It could snap their ribs.”)

The arm was developed by Touch Bionics, and is designed to complement the the world’s first bionic hand, pictured above and announced last year. Touch Bionics calls its technology i-LIMB.