They’re coming up like crocuses in the park: thanks to Mike Anissimov, we find that Forbes is the latest mainstream news outlet to hire on a blogger for the transhumanist/disruptive-tech/speculative-futures beat, in the form of Alex Knapp (who may not actually chomp cigars with any regularity at all, but hey: give yourself a masthead mugshot like that, and people are gonna jump to conclusions).

“Great, another naive singularitarian with a blog,” you may be thinking. “Like we need more of those, AMIRITEZ?” Well, give the guy a chance – looks to me like he’s going to be a lot less starry-eyed than some of the transhuman (ir)regulars, as this post responding to an H+ Magazine piece demonstrates:

The article goes on […] speculating the ways in which an advanced artificial intelligence might lower cancer risks or even develop alternative forms of energy.  But of course, nowhere does the article discuss how such an intelligence might be developed.  Nowhere does it discuss how you get from artificial general intelligence to the ability to model complex systems.  Nor does it discuss the limitations of such modeling.  No mention is made of potential drawbacks, technological failures, or anything.  It’s pure fantasy, masquerading as a serious proposal because it has a veneer of technology to it.

But frankly, you can show the reliance on magical thinking with just a few quick word changes.  For example, I’m going to change the title of the article to “Could Djinn Prevent Future Nuclear Disasters?”, then make just a handful of word changes to the paragraphs quoted:

“What is really needed, to prevent being taken unawares by “freak situations” like what we’re seeing in Japan, is a radically lower-cost way of evaluating the likely behaviors of our technological constructs in various situations, including those judged plausible but unlikely (like a magnitude 9 earthquake). Due to the specialized nature of technological constructs like nuclear reactors, however, this is a difficult requirement to fulfill using human labor alone. It would appear that finding magic lamps that hold Djinn has significant potential to improve the situation.

A Djinn would have been able to take the time to simulate the behavior of Japanese nuclear reactors in the case of large earthquakes, tidal waves, etc. Such simulations would have very likely led to improved reactor designs, avoiding this recent calamity plus many other possible ones that we haven’t seen yet (but may see in the future).”

I could, in fact, go through the entire article, replacing “AGI” with “Djinn” and a few other tweaks for consistency and not change the meaning of the article one iota.  Now to be fair, I don’t know if this author has grappled with these technological issues elsewhere, but as far as this article is concerned, wishing for a Commander Data or Stephen Byerley has about as much credence as wishing for a Djinn.  It’s simply not a practical solution for the moment.

[ A note to other editors looking to expand their stable of blogs with a soupçon of futurism and H+: this gun’s for hire, folks. *waves* ]

I’ve been a bit lax in not mentioning this before (blame the January churn, if you like), but better late than never, eh? Over at Locus Online, Karen Burnham’s busy rebooting the Locus Roundtable blog; one presumes they decided on including some fringe amateurs to balance out the heavy hitters, because yours truly has been invited to contribute. By way of introduction, Karen’s been posting the origin stories of the contributors – how we got our start in genre fiction, basically – and my little potted history appeared there just last night. So if you’re curious as to how I ended up reviewing science fiction novels and blogging about the shape of the imminent future, by all means go and find out!

Alternatively, check out the more interesting and erudite histories of such notables as Jon Courtenay Grimwood, Gary K Wolfe, Adrienne Martini, Paul DiFilippo, Charles Tan, and many more yet to come. (I figure if one is going to indulge in a bit of Imposter Syndrome, then it might as well be generated by the company of genuinely interesting and smart people.)

There are many more conversations and debates on the cards for the months ahead, so if you’d like a side-serving of meta-discussion with your usual science fiction diet, you could do far worse than clip that RSS feed into your reader…

Some glorious and fascinating reportage-porn at memetracker that shows how news stories are taken up and how long they last and what their impact is:

They found a consistent rhythm as stories rose into prominence and then fell off over just a few days, with a “heartbeat” pattern of handoffs between blogs and mainstream media. In mainstream media, they found, a story rises to prominence slowly then dies quickly; in the blogosphere, stories rise in popularity very quickly but then stay around longer, as discussion goes back and forth. Eventually though, almost every story is pushed aside by something newer.

There is something truly wonderful about seeing this information laid out in such an intuitive manner. This kind of analysis of the growth, spread, and retention of ideas is certainly an area that will expand and grow over time. 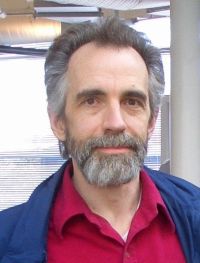 I dare say a lot of you will have seen this already, but for the rest: Eric “Engines of Creation” Drexler has launched his own blog, Metamodern. [image courtesy Wikimedia Commons]

Drexler is one of the leading thinkers in molecular nanotech, so there’s one reason to follow along and see what he has to say. But Drexler has more to offer:

Metamodern isn’t intended to be “a blog about nanotechnology”; its scope includes broader issues involving technologies with world-changing potential. For example, looking well downstream in technology development, I will sketch the requirements for large-scale systems able to restore the atmosphere to its pre-industrial composition. Closer to hand, social software and the computational infrastructure of our society are high on the list.

I think we can safely assume that Futurismic readers will find something of interest in his output.

Hello, boys and girls. You may or may not have noticed that Futurismic had a bit of downtime today.

Our hosting company informs us that this is due to the site hogging CPU resources – which means there’s either a lot more of you reading than we thought, that something’s broken, or that someone somewhere is playing a game we Brits refer to as “silly buggers”.

However, until we can accurately determine the source of the problem, we need to take measures to make sure it doesn’t happen again. So if you notice anything odd or untoward here in the next week or so, please bear with us.

It may be that we’re forced to deactivate the comments at some point, but this will not be a permanent change by any means.

And please also rest assured we’re working hard on a long term solution to the problems, which we hope to be able to make an announcement about very soon.