An opportunity arises to indulge in a bit of Gen-X/Y media nostalgia! UK-based readers of a similar age to myself may well remember this Ratmobile [context for the baffled*; image ganked from the TV-AM nostalgia archives]: 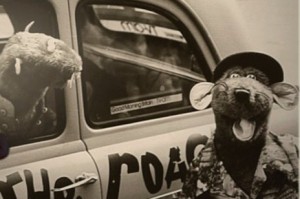 Now, simultaneously compare and contrast the above with Monday’s mention of mind-controlled wheelchairs and this little cyborg rodent fella [image ganked from Hack-A-Day, who got it from this IEEE Spectrum article]: 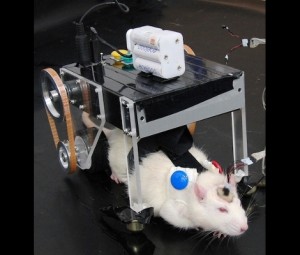 Awesome. Extremely creepy, and very much of its time, but still awesome.

[ * I was a huge Roland Rat fan, to the extent of pestering my mother for an at-the-time very out-of-fashion denim jacket in order that I might emulate his effortless cool. So, yes, I’ve always made rather odd fashion choices. Selah. ]

The appropriately-named Science Not Fiction blog at Discover shares a video of a thought-controlled wheelchair developed by Japan’s Riken technology agency; thought-control for wheelchairs isn’t a completely new development (at least not in terms of the accelerating technology curve), but the response time of this one – 125 milliseconds – apparently knocks previous implementations into the proverbial cocked hat.

Straw poll: if you could choose one machine or device that you use every day – with the exception of your computer or smartphone – to be mind-controlled, which one would it be?

Eric Schmidt is becoming one of those guaranteed link-bait interviewees for big media venues; unlike a lot of corporate bigwigs, Google’s CEO isn’t afraid to speak his mind. This interview at The Atlantic [via SlashDot, FuturePundit and others] is packed full of pluckable gems, though nothing quite so controversial as his recent musings on unGooglable childhoods.

First up, your “no shit, Sherlock” quote of the day:

“The average American doesn’t realize how much of the laws are written by lobbyists” to protect incumbent interests, Google CEO Eric Schmidt told Atlantic editor James Bennet at the Washington Ideas Forum. “It’s shocking how the system actually works.”

Naturally, Schmidt and company see that flaw as a business opportunity:

“Washington is an incumbent protection machine,” Schmidt said. “Technology is fundamentally disruptive.” Mobile phones and personal technology, for example, could be used to record the bills that members of Congress actually read and then determine what stimulus funds were successfully spent.

Later in the same interview,  there’s something of a minor disappointment for bleeding-edge early-adopter Google enthusiasts: there are no plans on the table for a hardwired Google brain implant.

When Bennet asked about the possibility of a Google “implant,” Schmidt invoked what the company calls the “creepy line.”

“Google policy is to get right up to the creepy line and not cross it,” he said. Google implants, he added, probably crosses that line.

The Atlantic‘s Derek Thompson, doubtless with a keen eye for irony, follows that revelation with this panopticon-esque nugget:

… Schmidt envisions a future where we embrace a larger role for machines and technology. “With your permission you give us more information about you, about your friends, and we can improve the quality of our searches,” he said. “We don’t need you to type at all. We know where you are. We know where you’ve been. We can more or less know what you’re thinking about.”

I’m not sure you see the “creepy line” as being in quite the same place as many of the general public, Mister Schmidt. 🙂

(PS – I’d totally beta test that implant idea for you.)

Some heavy but fascinating reading over at h+ Magazine, in the form of James Kent’s round-up of where we are with technologies for interfacing the human brain with technological hardware, and where we’re going with it. The big take-away point for me is that the more fidelity you want from the interface, the more invasive the interface needs to be, though that might change as the technology advances.

And here’s your slice of sf-nal thinking from the conclusion:

While the primary purpose of neural interface research is putatively therapeutic, the functional potentials and ethical concerns of neural porting are problems looming in the future. Right now these are hypothetical concerns, but if a single-access embedded neurode procedure could be perfected and automated and performed at a local clinic in two hours for around a thousand dollars, and it was covered by insurance, the temptation for cosmetic and personal use of such a procedure becomes clear. Neural interfaces can be abused, obviously, and can be hacked into to enslave and torture minds, or drive people intentionally insane, or turn them into sleeper assassins or mindless consumers. Security is an inherent problem of any extensible exo-cortical system that must be addressed early in the engineering and testing stages, or anyone with an exo-cortical input would be ripe for exploitation. Sensory discrimination is an ongoing problem in any media environment, so individual channel selection, manual override, and the ability to shut down device input should be an integral part of any embedded system.

Probably not a system you want Microsoft writing the OS for, then…