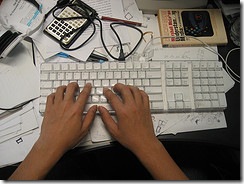 FreelancingBlog has collected some statistics that should be of interest to any aspiring writers, of fiction or otherwise. It’s kind of a mixed bag – some of them are quite heartening, like this one:

While others make you realise that there’s a lot more to getting published than simply bashing out a manuscript:

As the post says, you’ve got to have guts and perseverance if you want to make it through.

Any writers among Futurismic’s readers who’d care to share their experiences? [Image by dbdbrobot]

My feed reader is full of useful advice for writers once again, so I thought I’d share the wealth:

“Alas, market predictions aren’t like assholes, because everyone has two or three, and they usually serve little purpose.”

Luc Reid tries to nail down what it is that makes certain stories rise from “good, but not quite what we’re looking for” to “sold”:

“So what makes a story rise above its fellows, inspire love, stand out? The intuitive response would be that it does the things we talked about better. The characters are stronger, the plot is more compelling, the description is more vivid. But usually standing out is going to mean something else, and it’s going to differ from writer to writer and sometimes from story to story. The stories that rise above are not just more competent than the stories that don’t, although more competent is always better.”

Moving beyond the writing itself and into the territory of promotional work, Charlie Stross explains the dos and don’ts of public readings with his usual dry humour:

“The water jug isn’t an optional extra. I usually take the precaution of bringing along a drink of some sort, simply because my throat dries out after ten or fifteen minutes of speaking and if I’m scheduled late in a day of readings, the folks providing supporting facilities such as jugs of water tend to be getting a bit erratic themselves.”

And finally, David Louis Edelman has some advice on how to self-promote with ethical integrity:

“3. Avoid glaring sins of omission. This is a difficult guideline to follow, because it’s very subjective. Don’t use ellipses to claim that your book is “an absolutely terrific… thriller” when the actual review states that your book is “an absolutely terrific example of what not to do when writing a thriller.” Don’t try to sell to a group of Vietnam vets by claiming that your book has a Vietnam vet in it, while conveniently forgetting to mention that said character gets run over by a truck on page 4.”

Ah! The intarwebs: helping aspiring writers (to avoid writing by supplying them enough advice from genuine writers that they can convince themselves reading it is a more valuable way to spend their time than actually writing) since 1997!