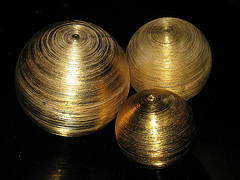 The Casimir effect occasionally shows up in SF has a way of holding wormholes open, or providing antigravity, or travelling in time.

However unlike flux capacitors, it seems though that real life scientists at DARPA are also interested in it though, having issued a request for proposals:

The goal of this program is to develop new methods to control and manipulate attractive and repulsive forces at surfaces based on engineering of the Casimir Force. One could leverage this ability to control phenomena such as adhesion in nanodevices, drag on vehicles and many other interactions of interest…

Could DARPA be trundling towards creating something as revolutionary as the Internet?

Only time will tell.

[story from The Register][image from Mike Schmid on flickr]