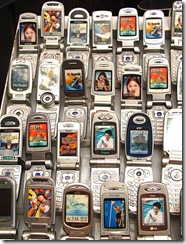 According to a recent report in Japan Today, ten of Japan’s print bestsellers in 2007–selling about 400,000 copies apiece–were based on cell phone novels, or “keitai shousetu.” The genre was born in 2002 when an author named Yoshi wrote Deep Love: Ayu’s Story for the cell phone. It was enormously popular and now lots of Japanese authors are writing short  intended to be read on cell phones. (Via GalleyCat.)

From the Japan Today story, which notes that according to a recent survey, 86% of high school, 75% of middle school and 23% of grade school girls in Japan read cell phone novels:

The way it works is this: novels are posted by members of cell phone community sites to be downloaded for free and read on other cell phones. Reading often takes place in crowded trains during long commutes. The works are published in 70-word installments, or abbreviated chapters that are the ideal length to be read between shorter train stops. This means that, despite small cell phone screens, lots of white space is left for ease of reading. Multiple short lines of compressed sentences, mostly composed of fragmentary dialogue, are strung together with lots of cell phone-only symbols. The resulting works are emotional, fast-paced and highly visual, with an impact not unlike manga.

Of course, you’re probably thinking “if they can write novels in 70-word instalments for cell phones, I could probably write a novel in 140-character installments on Twitter!”

You wouldn’t be the first. A post at ReadWriteWeb lists some attempts in that direction.

The future of reading, apparently, may lie with those with short attention spans, and the future of writing with the terse.