A message arrived in the Futurismic inbox from Shira Lipkin, a regular contributor in our Friday roundups. Says Shira:

I’m doing a blogathon this Saturday, July 26 – posting to my LiveJournal every half hour for 24 hours to raise money for the Boston Area Rape Crisis Center. This is my sixth year blogathonning, and I write spontaneous short fiction every year. It usually tends to have an urban fantasy bent (as in fantasy in a city, not paranormal romance), but this year, I’m taking a distinctly SF angle on it. For 24 hours, I’ll be in character as a xenoarchaeologist, trying to make sense of precollapse Earth… with the help of over 50 artists who donated “artifacts” to this project, including a few SF/F authors themselves. All artifacts are being auctioned, with a story card.

It all goes down on Shira’s Livejournal, and the auctions are findable on eBay.

And there’s a lot more info on my LJ about why I do this, and why BARCC.

Sounds like a super project for a great cause; I hope some of Futurismic‘s readership will lend their support! We hope it goes well, Shira. 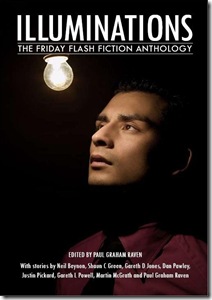 Along with Odd Two Out Publishing, I’m extremely pleased to announce that ILLUMINATIONS: The Friday Flash Fiction Anthology will be launched at Orbital 2008 next weekend.

Regular readers will be familiar with the Friday Flash Fictioneers from Futurismic‘s free fiction round-ups. We’ve teamed up and collected over sixty of our best flash stories from the last nine months, and yours truly has edited them into ILLUMINATIONS, all profits from which will be donated to the National Society for the Prevention of Cruelty to Children here in the UK.

ILLUMINATIONS is published under a Creative Commons Attribution Non-Commercial licence – the stories are already out there in the magical tubes of the internets, so we thought we’d like to set them free formally at the same time as making them available in one convenient and attractive package!

ILLUMINATIONS will be available in book form from Odd Two Out Publishing after 25th March 2008 (or from the authors themselves) for GB£6.99, or as a downloadable PDF for an as yet unannounced price.

And with the formal stuff out of the way, I’d just like to say that seeing my own name on the front of a book is probably the most amazing feeling I’ve had in my life so far!