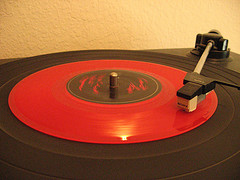 One of the biggest cultural gaps between me as a teenager in the nineties and my parents was our understanding of how music worked as a diverse cultural landscape. To them, the Top 40 charts told you what was best, what was universally popular. To me, the same chart was a pretty good guide to what a certain demographic thought was best – a deluded demographic that certainly didn’t include me. Ah, the arrogance of youth… [image by Jono Rotten]

And this was long before ripping and burning, iTunes, Napster and MySpace, of course. So little wonder, then, that you can count the number of people who find the old-fashioned chart run-downs relevant on the fingers of one hand. Stepping into the void are IBM and the BBC, with a plan to make music stats more detailed, accurate and interesting to individuals with different tastes. Take it away, TechDirt:

Rather than assuming there’s just one single chart to rule them all, the system lets you create custom lists for a better understanding of more niche-targeted music. So, say, if you wanted to know who’s hot on YouTube and Last.fm in the indie and punk worlds among US listeners between the ages of 20 and 30, you can create just that list. Or, as per Will’s suggestion, you could find out what female Emo fans between the age of 15 and 20 are talking about on Bebo — and get that list.

Technologically this is just another web2.0 data mash-up, but I think it’s interesting from a cultural point of view because it derails the still-common complaint that the world is developing into a homogeneous monoculture, and demonstrates that narrowcast media like the internet encourages diversity rather than suppressing it.

Of course, you could argue that the tribal nature of music fandom is symptomatic of a Balkanisation of culture, in much the same way as genre fiction fandom… in which case we should probably go to a gig together and have a very drunken argument about it. 😉