Google CEO Eric Schmidt has suggested that in the near future every person might be entitled to change their name on reaching adulthood, in order that they can live unhindered by the online record of their youthful indiscretions. Now, Eric Schmidt is almost certainly a much smarter man than I am… but that idea is clearly batshit nuts, especially coming from a Google bigwig.

I mean, think about it – most people use pseudonyms and handles online as it is. How many names and identities will you be allowed to abandon? One? Some? All? And as the vigilante efforts of Anonymous prove time and time again, even folk making a big effort to conceal their identity can have it exposed against their will. If Schmidt is implying (as he seems to be – it’s hard to tell from such a throwaway comment, to be fair) that the digital record would remain after this identity disconnection, how exactly would you prevent people from doing a combination of internet sleuthing and good old-fashioned meatspace gumshoe work in order to connect xCrazyLarry1989x to Lawrence Michaels, aspiring tort lawyer and gubernatorial candidate for his local Chamber of Commerce?

Given the way web technology keeps advancing, it may not even be much of an effort. Hell, Google itself offers a neat little app called Goggles that can identify famous faces and objects by comparing them to archived images on the web (as for values of ‘famous’, John Scalzi is apparently famous enough for this to work); given the sheer number of photos on the Facebook profiles of most young people, how are you going to prevent someone using this sort of image search and linking your newly-renamed Adult Person to the child they were?

Simple answer: you’re not. If what Schmidt actually means is that there’ll be some sort of legally-enshrined disconnect between an adult and their behaviour before adulthood, then maybe it’s not quite such a crazy suggestion… but it’s still pretty crazy. Personally, I tend to agree with Stowe Boyd and others: I think we underestimate the common sense kids apply to social media based on the high-profile idiocy of a tiny minority, and I think we overestimate the impact that youthful (or even not so youthful) indiscretions in the digital fossil record will have on how the people who left them behind will be viewed. As a crude numbers-from-the-air example: if one in five kids is pictured somewhere on the web taking a hit from a bong, is society more likely to (a) refuse to employ 1/5 of the population, or (b) figure that kids smoking weed really isn’t such a big deal?

Trouble is, we keep applying the social mores of today to the society of a decade hence. Think about how different the world felt just five years ago; attitudes change fast. By the time the internet’s knowledge of our past is sufficient to be causing problems for the majority of people, my bet is that we’ll be worrying about something else entirely. Or, to put it another way: when you have evidence that pretty much everyone has been a little bit naughty at some point in their lives, your assessment of how much naughtiness is forgivable will shift accordingly. Transgression is implicitly assessed against a baseline of ‘normality’; a searchable childhood for everyone will move that baseline. In fact, I’d even go so far as to suggest it’ll be the people with squeaky-clean pasts who end up looking the most suspicious… 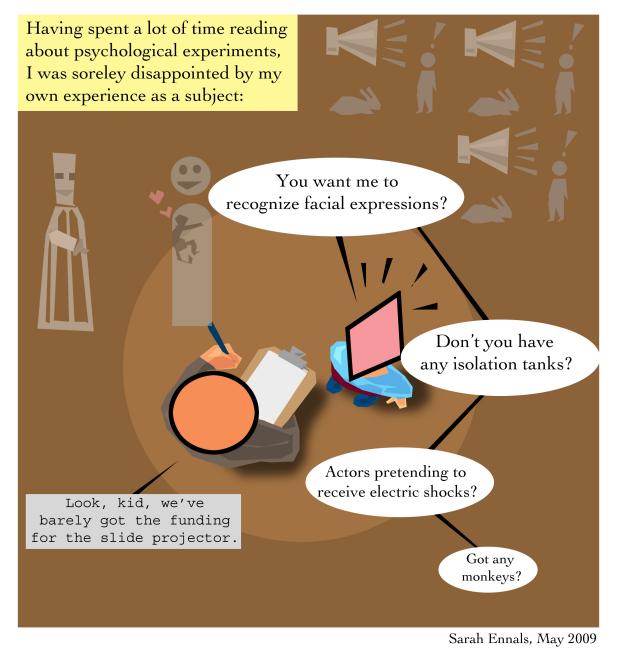