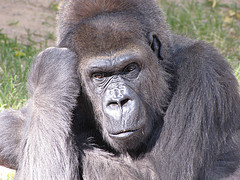 Transhumanist thinker George Dvorsky is contemplating the nature of personhood – how do we decide whether a creature is a person, and what rights and considerations should that status confer upon said creature?

A big question I would like to answer is, should personhood status be described as a spectrum or as a definitive, fixed state. In other words, are dolphins and bonobos as much persons as a genetically modified and cyborgized transhuman? And is such a distinction even necessary? Should persons, regardless of where they are situated in the personhood spectrum, all have the same moral and legal considerations? More philosophically, given the space of all possible minds, how can we begin to identify the space of all possible persons within that gigantic spectrum?

Now, part of Dvorsky’s thrust here is that he’s concerned we may deny personhood to sentient machines; it’s an interesting argument, but predicated on the belief that sentient machines are not just a possibility but an inevitability, and as such is easy to brush away if you’re a strong-AI sceptic.[image by jimbowen0306]

But he also links to a paper by Linda Macdonald Glenn which discusses genetic chimeras – an equally sf-nal idea that is pretty much on the doorstep of reality as we speak. Say someone has 5% pig DNA – are they then only 95% human? What social strictures might we find ourselves justifying on that basis? If that sounds unlikely, think how easily we use race or nationality as justification for different legal status; sadly, we’re far too practiced at labelling “the other” to simply skip over the question of someone’s genetic make-up.

Dvorsky is also passionate supporter of animal rights, and extends the argument in that direction, too; if sentience is a movable feast of sorts, where do we draw the line? I believe I’d be correct in interpreting Dvorsky as saying that there isn’t really any line at all between ourselves and any of the higher order animals, and that personhood is a continuum rather than a binary state. There’s a nobility to that position that I have great respect for, but I also feel it’s a case of putting the cart before the horse. I suspect that we’ll never learn to treat animals in fair and reasonable ways until we’ve reached a point where we can admit (and act on) the essential equality of all humankind – and, sadly, that day still seems to be a long way off.