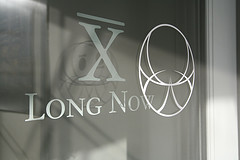 Some cool items from the Long Now Foundation:

Since we hope to build the space for the 10,000 Year Clock underground, for the last 10 years I have been collecting references and images of the great, ambitious, and or inspiring underground spaces and stonework of the world (in some cases they are also lessons of what not to do).

And if this project seems more than a little monkish, well, a wine seems appropriate:

Long Now’s eponymous red wine by the Pelissero winery was recently reviewed by Robert Parker’s Wine Advocate. … The labels are printed with archival inks on acid free paper and the corks are flame marked “Long Now”. 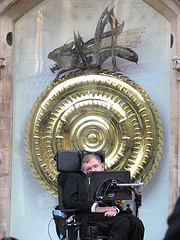 “Conventional clocks with hands are boring,” says inventor John Taylor. Much more interesting to build a four-foot-wide mechanical timepiece that has no hands or numbers, uses blue lights flashing through slits to tell the time, and is accurate only once in five minutes. Watch it work in a short video narrated by Taylor.

He based the clock on a design by longitude pioneer John Harrison, who was calibrating the one he built himself when he died in 1776. The ominous grasshopper sculpture atop the face is a tribute to another Harrison invention, the “grasshopper escapement” that releases a clock’s gears with each swing of the pendulum. The “Chronophage” (time-eater) was unveiled at Cambridge by Stephen Hawking, in a ceremony that ran 14 minutes and 55 seconds late. Taylor says:

“I … wanted to depict that time is a destroyer – once a minute is gone you can’t get it back …. That’s why my grasshopper is not a Disney character. He is a ferocious beast that over the seconds has his tongue lolling out, his jaws opening, then on the 59th second he gulps down time.”

[Hawking unveils the chronophage by rubberpaw]

Past Futurismic contributor Jay Lake has just published “Mainspring,” a novel about the gears of the universe, the Archangel Gabriel, and a clockmaker’s apprentice. I haven’t read it yet, but knowing Jay’s penchant for the inventive and his storyteller’s intuition, I’m sure I’ll like it. If you’ve read it, let us know what you think in the comments. [boingboing]