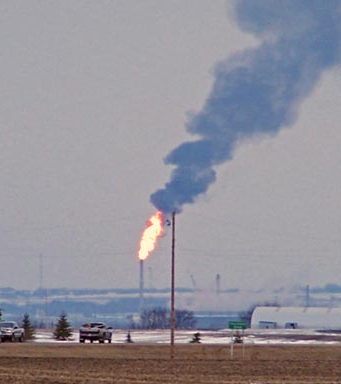 I think action is needed to prevent climate change and to mitigate against peak resources. However I don’t think we should go back to the stone age to do so. By pairing good governmental regulation with the invention and investment of smart business, important steps can be made without destroying either our livelihoods or the world.

Bad Science blog Depleted Cranium has some good posts on ten things Environmentalists rail against that is probably a waste of time and on what would be a more productive use of their protests. Things like Flaring, underground coal fires, Landfill gases and ship pollution are all things that could cut a huge chunk out of greenhouse gas emissions without denting our lives too much. Overall, we need to be encouraged to make everything we do more efficient, to give economic and social penalties to unneccessary waste. In many cases, this can often increase profits rather than losing them. There are some excellent posts on the Oil Drum related to this, especially those about Relocalization of Agriculture, The Limits of growth and an analysis of smaller cars and Jevons paradox – as cars get cheaper and more efficient, will the world just buy more and end up using just as much energy?

A lot of money has been pumped into Carbon Sequestration recently, to try and put some of the CO2 we produce back into the earth in the underground aquifers where we got the oil and gas that caused it in the first place. However, another way of storing carbon is in the soil, which benefits agriculture as well. Indigenous tribes in the Amazon basin have been using a technique of introducing charcoal to soil to produce darker ‘terra preta‘ soil for millenia. The low temperature charring of plants and trees introduces more carbon to the soil and encourages worms to break down the charcoal and soil to make a nutrient-rich loam.

A study into the method by MIT professor Amy Smith found that using agricultural char methods could be a great way of producing low-cost fuel for developing nation. You can view a speech on the subject she made at TED 2006 here. By burning waste materials in a gasifier, the methane, hydrogen and other burnable gases it produces can be used as fuels, leaving behind a charred solid that can be mixed into the soil as fertiliser, building back the soil content. Because the organic content has charred, it doesn’t decompose to be released into the atmosphere. WorldChanging has a great analysis that the process could actually provide power whilst potentially reducing the amount of carbon in the atmosphere.

[via WorldChanging, image via Papa Goiaba]