Via Bruce Sterling, one of the more obvious augmented reality applications, done elegantly: historical archive images overlaid onto the real (present/baseline?) world. The older I get, the more I become fascinated with history; if someone did up layers like this for the whole country, I’d probably never switch it off. [image ganked from TechVert; please contact for takedown if required] 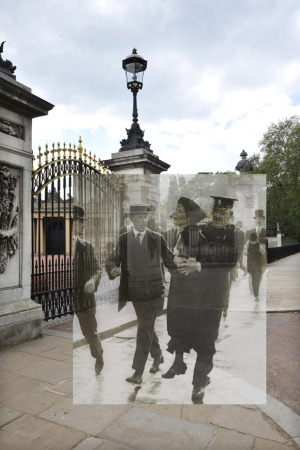 Give it a couple of years (or maybe less), we’ll be doing the same with archive video. Another few years, generative CGI that is practically indistinguishable from archive video. Alternate history as real-time immersive gaming experience… think of the 80-hours-a-week WoW player, and it’s easy to assume that some people will pretty much live in AR environments full time. A subsection of those people will make their entire living in that space, geographically contigious with baseline reality but offset (or derailed completely) from historical temporal flow. Whose laws will they obey? Who will they pay taxes to? What will their game goals be? Imagine a Victorian London ARG that’s something like The Sims – your goal is, basically, to survive your chosen socioeconomic mileue for as long as possible without dropping out… or dying in the attempt.

Related bonus link: MeFi points out an experiment into the mutability of memory as manipulated by doctored ‘historical’ images and media artefacts. Apparently not a very rigorous experiment, but nonetheless, the implication is that it’s alarmingly easy to convince us that a fabricated event actually occured. This is, hopefully, a temporary problem. It’s going to take us a little while to evolve the sort of high-sensitivity bullshit filters that an impossible-to-police internet demands, and ubiquitous AR will raise the bar another few notches; I suspect we’ll get there eventually. But unless technological progress hits a brick wall fairly soon, I suspect we’ll never fully catch up. This is a little like what evolutionary science calls an “arms race”, I think… though we’re now in an arms race with the cultural and technological output of our own species.

Thinking about it again, I guess we always have been… I’m sure I’m reinventing the wheel here (and if you can point me toward more thinking alonmg these lines, please pipe up in the comments), but the enormity of this revelatory idea has pretty much scuppered my chances of concentrating on anything else for the rest of the day.