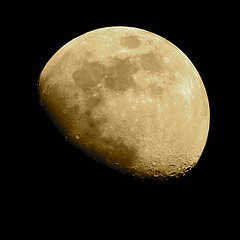 After a few decades of relative hiatus, there’s been a distinct increase of traffic around the Moon of late, and that has legal types scenting potential work in the offing. Once we start colonising our sister satellite – whether in person or via robot proxies – how do we decide who the territory belongs to?

Luckily for us, one Virgiliu Pop is already on the case. He’s a research specialist at the Romanian Space Agency (Romania has a space agency? Who knew?) who has been looking into the laws that might, by precedent, affect lunar settlements… and he reckons it’s rugged individualism and the pioneer spirit that will win the day:

“Homesteading is likely to transform the lunar desert in the same manner as it transformed the 19th Century United States,” he said. “Space is indeed a new frontier calling for individualism rather than collectivism, and its challenges need to be addressed with a legal regime favorable to property rights.”

As many empires have learned the hard way, maintaining control over distant colonies is no easy trick – and when the colony is at the other end of a steep gravity well, that’s only going to be more true. Anyone fancy a sweepstake on the period between first Lunar colony and first colonial secession? [image by jurvetson]

Canadian sf author Karl Schroeder has the sort of day job that anyone with a science fictional mindset would probably love to have – he’s a foresight consultant. Luckily, as internet denizens we can enjoy the fruits of his thinking without having to lash out on consultancy fees. Here’s his latest article for the consistently excellent Worldchanging blog, wherein Schroeder discusses the ecological footprint of humans as a species, and how we should approach our existence on Earth in much the same way as we would build a colony on another planet.