The title says it all. Created by this guy (though where on that site it might be found, I have no idea*; he may grok pricing models, but his website is a relic of the mid-noughties), found thanks to this blawg. Definitely applicable to writers thinking about alternative/indie publishing models, I’d have thought. 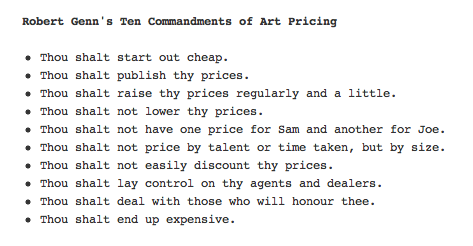 Interesting to note that the list is published as an image rather than as HTML text; I presume this is to prevent wholesale cut’n’pasting, though it could just be part of the image-obsessed culture that seems to permeate Tumblr as a platform. I suspect the former, though, as it’s that much easier to post the image rather than type out the list. Certainly worked on me, AMIRITES?

Related: Cory Doctorow’s ideas on a “no endorsement”label for derivative works; send the IP creator a cut of your profits while simultaneously absolving them of the (potential) crapness of the derivative work in question. Still assumes that the creator will bother to acknowledge the source explicitly, of course, but still good to see someone thinking about ways to cope when physical items become infinite goods**.

[ * This highlights one of my numerous gripes with Tumblr, in that – despite the cascading tree of reblogging notifications and callbacks, which is in itself very annoying unless you’re working within the ecosystem of Tumblr itself – it can still be hideously difficult to find where the original poster found the original item. An infuriating circle-jerk of a platform, and one I hope fades from fashion very quickly. ]

[ ** Of course, the actual materials used to make the items are unlikely to be infinite, though recycling and cradle-to-grave spime-like approaches may address this to some extent… don’t mind me, just thinking aloud here. ]