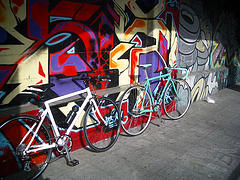 My journey to my day job is just ten minutes of hard thrash across town on my BMX*, but hardly a week goes by without someone coming within inches of ending my life (or at least my ability to walk unaided) with their car**. [image by freebeets]

And Velcro City doesn’t have a patch on the traffic nightmares that bigger metropolises like London or Glasgow have to offer – cities where commuting by bike is increasingly common and increasingly dangerous. So smart cyclists have worked out a way to put the burden of attention back on the car drivers: helmet-mounted video cameras.

“Although the camera has not changed my commute to any great extent, it does make me feel safer and calmer. Now, instead of screaming in annoyance at motorists, I simply point at my camera. It’s amazing how quickly they back off when they clock it.”

I really love the passive elegance of this solution, and it’s a reminder that ubiquitous surveillance can actually work for the benefit of the little guy… even though he’ll have to be proactive instead of waiting on Big Brother for help.

I wonder what the other upsides to the participatory panopticon might be? Will muggings and similar violent crimes start to drop off the scale when we’re all lifelogging our daily lives?

[ * Yeah, I should probably grow up, but I rode BMX for so long as a kid that the geometry of regular bikes feels completely alien to me. ]

[ ** Usually a taxi driver, too. That’s not stereotyping, either; I keep a diary, and the percentage stats are very telling. ]