Well, here we are: no one yet dead as a result of the latest WikiLeaks release, so far as I can tell, but a lot of egg on political faces. I remarked to a friend on Saturday that it’d probably contain depressing proofs of things we’d long suspected, and it looks like I wasn’t far off the mark… though that’s hardly an act of staggering insight and prescience on my part.

I’m going to leave the punditry and predictions to the professionals (or at least those with far more of the pertinent specialist knowledge than myself), but the one thing I’ll assert without any hesitation is that, while it may cause friction and difficulty in the political short- and medium-term, this leak – and others like it, past and future – is a good thing for us, the people of the world. Sure, nothing’s going to change overnight, and the removal of the public facades of diplomacy from the theatres of contemporary conflicts – be they physical, ideological, economic or all three – will certainly make things more difficult for all parties involved in them… but maybe that’ll mean said parties are less willing to start such conflicts in the first place.

“Sunlight is the best disinfectant,” in other words. But what do you lot think? 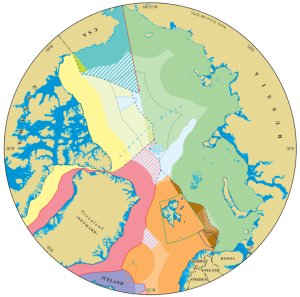 Things are heating up in the Arctic Circle – and not just because of climate change. The prospect of as-yet untapped natural resources lurking at the crown of the globe may cause a resurgence in territorial disputes, as various nations attempt to stake their claims to jurisdiction over the area.

In an effort to inform policy-makers, researchers in the UK have used specialist geographical software to create a map that lays out the potentially disputable regions in detail. Whether the map becomes a focal point for reasoned discussion or a template for military operations rooms remains to be seen. [image courtesy Durham University via linked BBC article] [hat-tip to Darren@Orbit]