As of this Friday, Walgreens customers in the US will be able to purchase a home-use genetic testing kit for US$30 or less… though access to the results (via the Pathway Genomics website) could cost another $200 or more, depending on what the user wants to know [via MetaFilter].

Though mail-order DNA tests have been available over the Internet since 2007, Pathway Genomic’s new campaign brings the personalized genomics market to a neighborhood near you, hopefully lending an air of trust and familiarity to the practice, says vice president of marketing at the company, Chris D’Eon.

“People trust their pharmacy and their pharmacist,” he says. “The world is moving towards a preventive health society and working with Walgreens is a huge opportunity to market [personalized genetic screening] to more people, faster.”

Customers who purchase Pathway Genomics’ “Insight Saliva Collection Kit” will collect their samples at home and return them (a postage-paid box is included) to the company. From there, all other steps are online. Customers need to buy the actual tests on their DNA separately and will receive their reports in about eight weeks via e-mail.

A report on how you will respond to drugs like statins or Tamoxifen runs $79. A pre-pregnancy planning report, which provides information on your baby’s risk for genetic disorders, is $179, and a comprehensive test, including your personal risk on a number of diseases, is $249.

People with important job titles are not impressed:

Lee Vermeulen, director for the Center for Drug Policy at the University of Wisconsin Hospital and Clinics, agrees, calling the test “reckless and inappropriate.”

“Regardless of whether they are told they are at low or high risk, the impact on their future behaviors will be affected substantially and inappropriately,” he says.

A high-risk result may alarm the consumer needlessly, doctors say, and a low-risk one may provide a false sense of security, lulling consumers to pay less attention to their health habits and skip preventive medical screenings.

Doctors also said genetic factors can only explain a portion of disease risk, and were concerned that customers getting a genetic “clean bill of health” would mistakenly think they were in the clear.

I’d be the first to say that you should have access to your own genetic code-base, but given the general public’s incredible susceptibility to quackery, oversimplification and medical mythinformation, getting any genuine use from it will remain the province of the highly-trained, while the fast money will be found in giving people the interpretations they most want to hear (or already fear to be true). The Food & Drug Administration is looking into the Pathway kits (which have allegedly never been approved by them for sale to the general public), but I think we can assume Pandora’s box to have been irrevocably opened at this point. 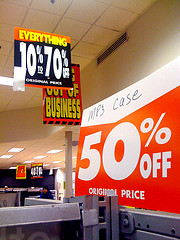