Plenty of stories recently about the massive uptick in ebook sales (though many of them are playing a little fast and loose with the figures), but with an uptick of interest in an infinitely reproducible good comes a proportional uptick in people interested in getting it for free.

eBookNewser points to an Attributor study that seems to suggest the arrival of the jeebusPad – which has made some publishers very excited, perhaps by dint of being arguably the first piece of ereader-functional hardware with a bit of sexiness to it – has brought with it a 20% increase in search queries for pirated versions of ebooks.

The study showed that the popularity of Rapidshare as a host for pirated content has steadily declined since Attributor first raised awareness about the site in August 2009. However, other, smaller cyberlockers, have increased their position in the piracy market, with a 54 percent increase in overall demand for pirated material since August 2009.

Further, recent innovations and availability of new technologies has catalyzed e-book syndication opportunities. The chart below shows a spike in the demand for pirated e-books around May 2010, only one month after the release of the Apple iPad. More than 250 iPhone, iPad and iPod platform users searched for pirated copies throughout the study, pointing to the immediate need to raise awareness and education about syndication proliferation in the age of digital and mobile media. 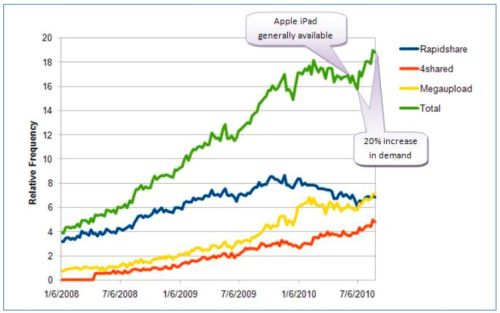 Now, I’m no stats boffin, but it looks to me that the green curve there is actually just continuing much as it was before the iPad’s arrival; the downtick around its launch date could be down to any number of factors, but I remain to be convinced (or have more thoroughly explained to me, perhaps) how the increase since then is out of character with the curve as it was before.

(Try holding a ruler up against the screen; the downtick from June 2009 to June 2010 looks to me more like a momentary anomaly than a trend that supplanted a previous trend only to be supplanted again.)

A generous helping of cynicism salt is required to season Attributor’s interpretations, of course, because they’re in the business of selling ‘solutions’ to the piracy problem (good luck with finding one that can’t be circumvented by a handful of bored teenagers with a crate of Mountain Dew, folks); their implicit demonisation of “content lockers” will be a familiar meme to those who follow the digital end of UK politics, also (content lockers enable piracy, therefore they should be banned or policed; no suggestion of banning cars for enabling people to be knocked over yet, though).

What’s fairly obvious and believable, though, is that demand for pirated ebooks is climbing steadily, and has been doing so consistently. And that spells trouble for anyone looking to make ebooks a part of their business model… indeed, I wouldn’t be surprised to see similar growth curves for interest in pirated music files from around the time when the first affordable mp3 players began to appear.

The publishing industry appears to have woken up and smelled the coffee much more quickly than the record labels did, but whether they can successfully cut the Gordian knot of abundance economics remains to be seen… and while it’ll doubtless mark me as a Doctorow 5th-columnist*, I feel pretty safe in saying that DRM and closed hardware isn’t the sword for the job.

[ * Content crypto-Marxist? Or, y’know, just a pragmatic realist? Depends on which angle you’re looking from, I guess. 😉 ]