Virtual worlds of all stripes are becoming the next gold-rush frontier for an increasingly beleaguered advertising industry, with lots of research being expended on finding the best way to gets brands in front of the captivated gaze of the average computer gamer.

Trouble is, it’s not quite as simple as cutting a product placement deal and hoping for the best. Ars Technica reports on one research paper that claims the important things to do are to not interrupt the game, and to make sure the brand “fits”:

When ads were placed into Sony’s WipeOut HD they played within the game’s loading screen, and artificially inflated the time it took to get into a game. The ads were quickly pulled, but it’s a powerful object lesson: don’t mess with the game itself. Any company that bought time in such a slot could easily do damage to their brand instead of spreading awareness.

The most important aspect of ads that follow the rules of fitting into the game world and not interrupting the flow is placement, which the study calls the “key element,” explaining “why some advertisements do not get much attention or are not remembered, even though they are constantly present in the field of view.” Brand awareness does not matter, it was found, so even a popular brand can’t overcome poor placement.

There is always a risk when advertising within a game. “If the advertising is presented at the wrong time or place, it just does not catch the player’s attention in the best case. In the worst case the player might even develop a disliking for the advertised brand,” the study showed. Of course, to find the optimal placement found in the study, you’ll have to buy the results, which will run you €800.

Meanwhile, The Guardian mentions another report which suggests (rather shakily, from the look of it) that brand recall is enhanced by violent game content:

The team based at the University of Luxembourg created a simple driving game named AdRacer in which players needed to drive over targets to gain points, while adverts were displayed unobtrusively on roadside billboards. In one version of the game, the targets were just symbols, in another, players had to run over pedestrians to increase their scores. Apparently, “Those who played a violent version of the game […] demonstrated significantly better recall of advertised brands than those who played the regular version.”

The problem is, although the violence seems to trigger something in the mechanism of human memory – it’s not always good news for the advertiser; the connotations can be rather destructive, negatively impacting the gamer’s opinion of the brand.

Why mention the crude commercial nastiness of marketing on a near-future science fiction blog? Well, even I can think up a passable plot for a story from the above two articles, for a start…

But we’ve also been talking about augmented reality a fair bit of late, and the metaverse is a perennial here as well – and both of those conceptual spaces can – and will – be colonised by marketing in exactly the same way that the physical surfaces of the “real” world already have been.

Forewarned is forearmed, as the saying goes… and as Jan Chipchase points out, if you already find regular ads to be ugly, annoying and intrusive – be they on the internet or on a wall – the future of contextual advertising isn’t going to be pretty at all. 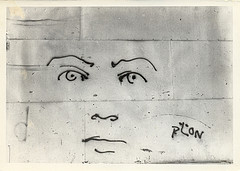 Here’s a neat bit of alarmingly plausible speculative thinking for you – what if the next frontier for contextual advertising is us?

The gent sitting next to me is an advert for high risk heart disease – the last passenger to rush aboard the plane, snarling at fellow passengers as he marches the isle trying to find space for his luggage, squeezing his plump frame into seat 8E before proceeding to wolf down 2 buttery croissants. It’s a compelling enough everyday drama for the stewardess to raise her seen-it-all-honey eyebrows, and its compelling enough for us to want to know more. If you’re in the business of pushing ads this is obviously an opportunity to push your product.

Sound ridiculous? Well, not really – how many small-time bloggers already rake back a few cents from ads on their sites? And it’s not like we’re averse to the idea of promoting products on our person: think about designer sportswear, or music and film merchandise. [image by Mikey G Ottowa]

By the way, the linked site is the blog of Jan Chipchase, who’s a kind of futurist thinker employed by Nokia to travel the world and think up stuff like this. And if you’re even vaguely interested in futurism (which, if you read Futurismic, I guess you must be), you should really be subscribed to it. He’s a very smart cookie indeed.