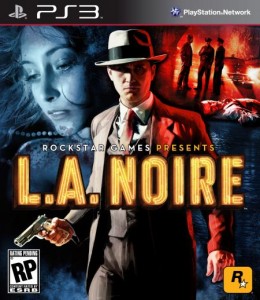 As a devotee of noir fiction and a long-time admirer of both James Ellroy’s LA Quartet and Curtis Hanson’s L.A. Confidential (1997), I was more than looking forward to Team Bondi’s attempt to recreate 1950s Los Angeles using the Grand Theft Auto sandbox template. However, as soon as Ken Cosgrove was shoved into an interview room with a suspect and told to extract a confession, I knew that something was desperately wrong – not just with L.A. Noire, but with video games as a whole. After decades of investment in realistic graphics and physics engines, modern video games can perfectly recreate what it is like to shoot someone in the face… but ask them to recreate a believable conversation between two humans and they are at a complete loss. What we need is a revolution in the way that games portray social interaction. END_OF_DOCUMENT_TOKEN_TO_BE_REPLACED

This just in: Chinese whispers happen on real-time social communications platforms just as they do in real life, only faster!

Here in the UK yesterday there was a brief Twitter panic about a non-existant shooting in London’s Oxford Circus, highlighting the problems inherent to the 24-hour global peer-to-peer news cycle: namely that when an erroneous signal gets out onto the network, it’ll probably propagate more quickly than the less senational truth of the matter. Cue lots of “bad Twitter!” punditry, which largely misses the point: this phenomenon isn’t new, it’s just a faster version of the good ol’ scuttlebutt. Some sensible thinking from GigaOM:

Traditional media have struggled with the issue as well, with newspapers often running corrections days or weeks after a mistake was made, with no real indication of what the actual error was. In a sense, Twitter is like a real-time, distributed version of a news-wire service such as Reuters or Associated Press; when those services post something that is wrong, they simply send out an update to their customers, and hope that no one has published it in the paper or online yet.

Twitter’s great strength is that it allows anyone to publish, and re-publish, information instantly, and distribute that information to thousands of people within minutes. But when a mistake gets distributed, there’s no single source that can send out a correction. That’s the double-edged sword such a network represents. Perhaps — since we all make up this real-time news network — it’s incumbent on all of us to do the correcting, even if it’s just by re-tweeting corrections and updates as eagerly as we re-tweeted the original.

Taking responsibility for our own contributions to the global conversation? What a controversial suggestion! Of course, the problem is that “nothing much happening in Oxford Circus after all” just isn’t as interesting a conversational nugget, and therefore doesn’t get passed on as quickly or frequently. (Compare and contrast with the old aphorism that good news doesn’t sell newspapers.)

Related to this is the rush-to-explain (and rush-to-blame) that follows a story, real or otherwise: see, for example, the instant dogpile of people pinning the blame for the Tucson tragedy on Sarah Palin*. Again, it’s an age-old process that’s been scaled up to global size and accelerated to the speed of electrons through wires, and I suspect that we’ll adjust to it eventually: like a teenager adjusting to his or her lengthening limbs, we’re bound to knock a few things over as we grow.

[ * In the name of pre-emptively deflecting my own dogpile, I think that the political rhetoric from all sides in the US has demonstrably contributed to escalating tensions, and I find Sarah Palin an utterly repugnant exploiter of ignorance, be it her own or other people’s. However, the rush to find her prints on the metaphorical pistolgrip was not only counterproductive (that sort of political fire thrives on the oxygen of martyrdom), but was also precisely the same sort of demonisation of ideological figureheads that the left accuses the right of relying on. The further apart ideologically the two polar positions appear to be, the more alike in character they seem to become… and while it might be possible to pin that problem on The New Media™, I don’t think it’ll stick. More depressing still were the countless articles decrying Palin’s “it’s all about me!” attitude to the tragedy, coming as they did in the wake of half the damned internet telling Palin it was all about her. C’mon, folks, work it out. ]

Behind the inevitable allusions to Star Trek, this is an interesting story: scientific evidence that the brain waves of someone listening closely to another person’s speech can synchronise with them.

The evidence comes from fMRI scans of 11 people’s brains as they listened to a woman recounting a story.

“We found that the participants’ brains became intimately coupled during the course of the ‘conversation’, with the responses in the listener’s brain mirroring those in the speaker’s,” says Uri Hasson of Princeton University.

Hasson’s team monitored the strength of this coupling by measuring the extent of the pattern overlap. Listeners with the best overlap were also judged to be the best at retelling the tale. “The more similar our brain patterns during a conversation, the better we understand each other,” Hasson concludes.

Apparently (and completely unsurprisingly) an unfamiliar language acts as a barrier to this synchronisation – if you can’t understand the person who’s speaking, you can’t “click” with them. This is probably the best argument for a single global language that I can think of… but I wonder if poor comprehension of the same language would produce similar results to a completely foreign language?

Another month, another inadequate pay-cheque. More empty days and suffocating nights alleviated only by cheap hooch, regrettable takeaways and the occasional all-too-brief orgasm. This is your life… and this is the return of Blasphemous Geometries.

The critical language of science fiction is balkanised according to the media form which the work being discussed belongs. Jonathan McCalmont suggests it is the critic’s place to encourage a merging of genre’s disparate media tribes. END_OF_DOCUMENT_TOKEN_TO_BE_REPLACED