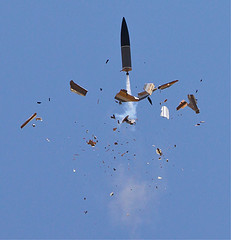 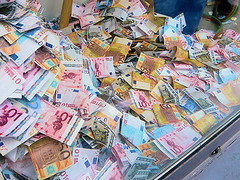 It sounds like a tautology to say that cash costs money – ten bucks costs ten bucks, right? But for every ten-spot note you carry in your wallet or purse, you’re paying extra in banking fees elsewhere for the maintenance of the cash storage and distribution system – the upkeep and servicing of ATMs, for example. And then there are the subsidies, and the social costs…

David Birch suggests that, while we’re looking around for ways to make our economic systems more rational, ditching cash in favour of all-digital transactions would be good for us. But he’s aware it’ll be a hard sell:

I can’t see how the pricing problem is going to be resolved. Telling consumers that they will have to start paying more at the ATM because they will gain more overall will never work because the costs are immediate and visible but the benefits are diffuse and invisible. Perhaps use e-money fans should refocus. As Leo pointed out to me, almost two-thirds of the euros in circulation are in high denomination notes: these are not used for everyday transactional purposes but as stores of value in the less-regulated parts of the economy. Could be then achieve the goal of reducing total social costs and boosting the net welfare by explaining to our elected representatives that cash is not simply expensive, but dangerous?

The implicit point in there is that large amounts of circulating cash are of benefit to those who already have more money than everyone else, and to businesses whose legitimacy may not be entirely unquestionable; history suggests that asking governments to make things harder for such groups is unlikely to be a great success, for a variety of reasons. [image by stefan]

I remember being told at school in the late eighties that by the time I was part of the adult world, no-one would be using cash any more; a cashless society is well within our technological grasp, yet still we tote around slugs of metal and grubby slips of paper to pay for things. Would we really be better off without physical currency? And if so, why aren’t we already rid of it?