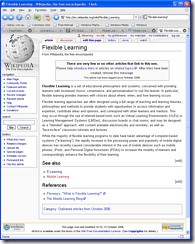 Reports suggest that an over-enthusiastic wielding of the banhammer by a high-ranking Wikipedia admin has blown the lid off of a secret internal mailing list used to maintain the control of a central cabal of editors.

I don’t find the existence of website power-cliques particularly surprising; I can’t think of one forum or blog I’ve posted on where an ecosystem of rank and authority hasn’t emerged from the community. In most cases, nor do I find it particularly worrying.

Wikipedia is a special case, however – simply by dint of its claims to impartiality and universal editorial access – and it will be interesting to see what comes of this story. I’m also taking it with a pinch of salt – while it’s doubtless based on fact, there are a lot of folk with axes to grind against Wikipedia for various reasons, and most reports about it are at least as biased as the average Wiki article. And therein lies the crux of the issue, which The Register’s article sums up nicely:

“If you take Wikipedia as seriously as it takes itself, this is a huge problem.”

I use Wikipedia quite a bit, but never as a primary source, and never to research issues or persons of a controversial nature. What about you – is Wikipedia a valuable resource or a waste of bandwidth? [Image by Leonard Low]