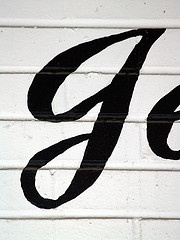 Bruce Sterling flags up a different kind of dead media in a Boston Globe story bemoaning the death of cursive handwriting:

“My first reaction was horror,” Florey said in an interview at her home, “then I thought, ‘Why would anyone use handwriting in today’s world?’ I write my books on the computer. I discovered two schools of thought: One is that it wouldn’t matter if nobody learned handwriting because we all have computers, and the other is that this is an interesting, historic, valuable, and beautiful skill that has been around for thousands of years, and we are just tossing it out.”

The thing to note here is that it’s not necessarily a computer-driven death of literacy, per se (although that’s a common enough complaint, despite the lack of solid evidence to back it up). People can still read as well as ever; it’s doing “joined-up writing” – as it was referred to when I was at school – that people struggle with, and I’m not sure that’s as terrible a loss as it could be. [image by tacomabibelot]

I still handwrite all the time, but I almost always use block caps because it’s faster and easier to re-read (though those familiar with my handwriting might disagree on the latter point, with some considerable justification). What the people bemoaning cursive’s decline seem to not realise is that styles of handwriting go out of fashion very quickly; in my day-job at a museum library, many of our visitors struggle to read copperplate script from less than a century ago, and most of them are highly literate.

There’s a clear argument that the lack of the ability to write by hand in any form would be a tragedy, and I suspect that schools may well be skipping over the skill in deference to computer use (which I suspect maybe closely related to the increase in dyslexia diagnosis), but to bemoan the loss of cursive is to miss the point. You might as well complain that not enough people design websites with Comic Sans as the main font…