Eric Schmidt is becoming one of those guaranteed link-bait interviewees for big media venues; unlike a lot of corporate bigwigs, Google’s CEO isn’t afraid to speak his mind. This interview at The Atlantic [via SlashDot, FuturePundit and others] is packed full of pluckable gems, though nothing quite so controversial as his recent musings on unGooglable childhoods.

First up, your “no shit, Sherlock” quote of the day:

“The average American doesn’t realize how much of the laws are written by lobbyists” to protect incumbent interests, Google CEO Eric Schmidt told Atlantic editor James Bennet at the Washington Ideas Forum. “It’s shocking how the system actually works.”

Naturally, Schmidt and company see that flaw as a business opportunity:

“Washington is an incumbent protection machine,” Schmidt said. “Technology is fundamentally disruptive.” Mobile phones and personal technology, for example, could be used to record the bills that members of Congress actually read and then determine what stimulus funds were successfully spent.

Later in the same interview,  there’s something of a minor disappointment for bleeding-edge early-adopter Google enthusiasts: there are no plans on the table for a hardwired Google brain implant.

When Bennet asked about the possibility of a Google “implant,” Schmidt invoked what the company calls the “creepy line.”

“Google policy is to get right up to the creepy line and not cross it,” he said. Google implants, he added, probably crosses that line.

The Atlantic‘s Derek Thompson, doubtless with a keen eye for irony, follows that revelation with this panopticon-esque nugget:

… Schmidt envisions a future where we embrace a larger role for machines and technology. “With your permission you give us more information about you, about your friends, and we can improve the quality of our searches,” he said. “We don’t need you to type at all. We know where you are. We know where you’ve been. We can more or less know what you’re thinking about.”

I’m not sure you see the “creepy line” as being in quite the same place as many of the general public, Mister Schmidt. 🙂

(PS – I’d totally beta test that implant idea for you.) 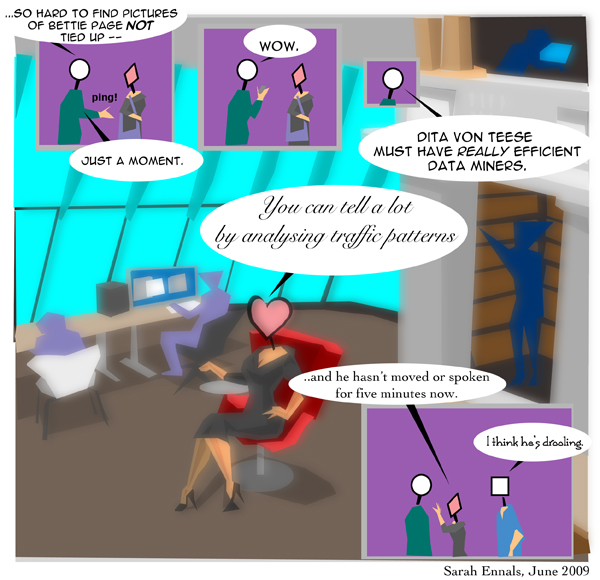