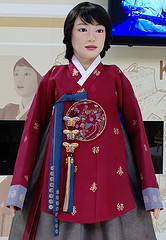 Would you have sex with a robot? My money would be on most of you answering with a firm and assertive “no”… but David Levy thinks otherwise.

Levy just won this year’s Loebner Prize – the Turing Test contest for chat-bots, which he last won back in 1997. But writing convincing chatbots isn’t Levy’s main fascination. For him, convincing artificial intelligences are just one of the planks that will build the platform for robot companions – robots that will act as friends or pets, as full-time carers, and – perhaps – as lovers. From an interview at The Guardian:

“I think the sex robot will happen fairly soon because the bottom is dropping out of the adult entertainment market, because there’s so much sex available for nothing on the internet,” says Levy. “I think the market was worth something like $12bn a year, and they aren’t going to want to lose all their income, and this seems to me an obvious direction to go. The market must be vast, if you think of the number of vibrators that sell to women. I’m sure a male sex doll with a vibrating penis will sell better than sex dolls today. I’ll be surprised if it’s more than another three years or so before we see more advanced sex dolls with more electronics and electromechanics.

“There will be a huge amount of publicity when products like this hit the market. As soon as the media starts writing about ‘My fantastic weekend with a sex doll’, it will be like the iPhone all over again, but the queues will be longer.

Last year I reviewed Levy’s book Love & Sex With Robots for Vector, the critical journal of the BSFA, and went on the record as being skeptical of his claims – though I had to justify my skepticism by recourse to my emotional responses as much as to my reason. As sensationalist as his claims may sound, Levy has done a lot of research into not only robots and artificial intelligence but also the aspects of human psychology and emotion that might govern our willingness to enter into complex relationships with machines; my doubts rest in the economic unlikelihood of ubiquitous robots of the type Levy describes, rather than human unwillingness to take them to the bedroom. [image by destione]

Some people, of course, find the notion of sex with robots to be ideologically repugnant – take, for example, this rather lumpy (and unintentionally hilarious) piece of speculative writing from a Christian technophobe/creationist website [via Pharyngula]:

Initially, all FACA had been designed as young adult versions of their human counterparts. However, emboldened by their sweeping victories in the courts, FACA were soon designed as young girls and boys, and even animals, to meet every possible sexual perversion of their intended markets. Even those men who bought the adult FACA versions found their attitudes changing, since there were no consequences to anything they did with their FACA. After all, it didn’t matter if you swore at your FACA or spoke harshly to it, since it always did exactly what you wanted. Over time, men who owned FACA became more and more rude to their human counterparts as the degradation of society accelerated. Men who owned a FACA disdained the company of real women, with all their incessant demands and mood swings. The sexual revolution was complete and we were all the victims.

Cringing techno-fear aside, some of the concerns there are legitimate – but Levy’s book has meticulously researched answers for them all, and while I wouldn’t call myself a convert I’d strongly recommend it as a worthwhile read for any serious science fiction reader (or writer).

Would you have sex with an android – even if only just once, to see what it was like? If not, why not?