I’ve been absent from here for a while because I’ve been working on other things, but those things are very much related to Futurismic as a project, both in terms of what it has been, and what it will be.

More on that later, though. I want to get things back in motion by talking about one of the growing number of places where science fiction meets science. This is something I’m finding myself talking about a fair bit of late, being an sf writer and critic who now works as a researcher in an engineering department, and I have a paper under review with a futurism journal which is essentially an exploration of ways science fictional narratives can inform future research and/or strategic planning. “Are they any use at all, then?” is naturally something I get asked a lot. My answer is a qualified and cautious “yes”, but there’s a raft of caveats which I’m going to start working through here in the months to come.

But this post is all about the sort of alliance between science fiction and science that I’m having to push back against. Futurism has a pretty bad name in many places, and not without justification; there are a whole lot of hucksters and dime-store prophets wearing that hat. Why, look — here comes one now!

I got a LinkedIn message this morning; here are the opening ‘graphs.

I have recently become involved in helping a fascinating crowd-funding project called Dragon Empire which is now on Kickstarter during January. Dragon Empire is a science fiction novel by Dr Adam Weigold about a future world war between China and the US.

What is really fascinating about this project is that it is helping to fund a laser physics experiment aimed at developing a revolutionary new “non-lethal” directed energy technology for missile defense applications (Laser Powered EMP technology which is described in the novel). This is in fact the first military R&D project crowd-funded on Kickstarter. The technology is non-lethal with potential for defensive applications only, and promises to render guided missile attacks from terrorists obsolete. Laser Powered EMP could ultimately make all forms of air travel safer.

Loving the scare-quotes around non-lethal; saved me the effort of putting them in myself. Laser-powered EMP, unless I’m very much mistaken, could be just as effective against aircraft as against missiles, what with both of them having a whole lot of electronics inside them. But I guess it’ll be fine so long as it’s only the White Hats that have it, AMIRITEZ? (See also: drones, nukes, pretty much anything else.)

Kickstarter plugs for skiffy novels by the justifiably unpublished are hardly rare (though I’ve been seeing a lot more for short film projects in my inbox of late), but there’s a definite novelty with this one: using the (probably very hawkish) novel to promote and fund the development of a proposed weapon system? Top marks for ambition… though given that military budgets are one of the few places that there’s still masses of cash sloshing around, and further given that the Pentagon is rarely shy of throwing wads of said cash at some of the most spurious blue-sky bullshit around, I found myself wondering why Dr Weigold decided to jump — somewhat late — onto the Kickstarter bandwagon. Because, let’s be honest, the book is a trojan horse; this is all about the PEWPEWPEW.

So, here’s the website for LightningGun.com, Weigold’s company — which appears to be Weigold and his father. (They’ve certainly stayed frugal on the webdev side of things.)

Lightning Gun is now developing ways to generate funding to establish the research infrastructure required for large scale LGPE experiments. […] the estimated cost of large scale experiments will increase by a factor of 20 to more than US$5 million over 2-3 years. We intend to raise this funding via a combination of (a) Crowdfunding Projects, (b) Sales of Science Fiction Publications and (c) US Government Research Grants. At Lightning Gun Inc. we want to turn science fiction into reality using an organic business model with no reliance on bankers or venture capitalists. In short, we want to do it our way!

Weapons research with minimal oversight from investors? That’s sure to be well-intended! Though some market research might have been helpful; ain’t no money in selling science fiction novels these days. I suspect the real prize is in those gub’mint grants, and options a) and b) are about scaring up enough cash to hustle for said grants.

This is all conjecture, of course; I can’t claim to know the motivations of people I’ve never met. But in the absence of solid knowledge, one must judge an animal by the spoor it leaves behind… and so, for your elucidation, here’s a post by Dr Weigold at BigScaryIdeas.com entitled “Can pollution save the planet?”. To give him the benefit of the doubt, you should maybe read the whole thing, but here’s my own precis:

Carbon dioxide causes global warming but we can’t stop it now and we’re past the tipping point and anyway we all breathe out carbon dioxide so what do you want to do, brick up our mouths or something, you MONSTER? Anyway, if we’d just kept burning the dirtiest carbon-based fuels, all that lovely smoke would have lowered the planetary albedo and helped cool things down a bit, so the obvious solution to global warming is to burn more dirty carbon-based fuels. But that’s an unacceptable suggestion because [massive liberal sandal-wearing science conspiracy]! JUS’ SPEAKIN’ TRUTH TO POWER, YO.

I find myself with a hypothesis as to why Dr Weigold has moved from Australia to the United States; the former is slightly (but only slightly) less a haven for Big Fossil shills than the latter, after all. Note the crafty rhetorical positioning: he’s not a Denialist (sorry, sorry, “Skeptic“), but nor is he a Believer! Plus, climate change is basically just a question of how the atmosphere works (O RLY?), and apparently the only real authorities on climate change are the atmospheric physicists. (Pack up and go home, meteorologists; you’re just wasting your time, and your kids probably haven’t seen you in weeks.) It’s been interesting watching the rhetoric of denial shift over the last few years, rather like that slow motion video of a man dropping a cat; outright attacks on climate science have started to be counterproductive, so cherrypicking is the new (old) game in town.

Of course, Dr Weigold is entitled to his opinions, and perhaps he’s right; maybe pollution is the solution! 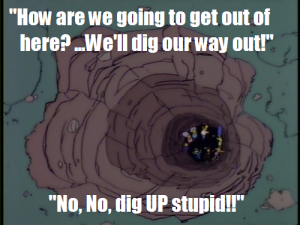 Anyway, enough of my snark; I’ll end by pointing out that the Dragon Empire Kickstarter fund drive is currently at $531 out of $20,000 with 24 days left to go. I realise that I may be supplying the oxygen of publicity to the tentative new flame of crowdfunded technopork, but I’m working on the assumption that anyone daft enough to cough up cash for a book and a baseball cap because [terrorism] probably has more money than they need.

Science fiction and science can do interesting and valuable things together.

This is not one of them.