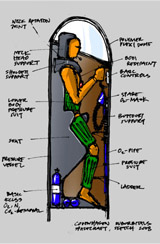 Danish researchers at the Copenhagen Suborbitals project seek to launch a one-man rocket projectile into space, from their mission statement:

This is a privately funded suborbital space endeavor.
Our mission is to launch a human being into space.

We are currently developing a series of suborbital space vehicles – designed to pave the way for manned space flight on a micro size spacecraft.

What fun! The thought of riding into the sky inside a rocket!

Apparently the idea is for the astronaut to be situated in a standing position beneath the transparent, polymer-plexiglass nose-cap!

Their candour is to be saluted, as is the bravery of the prospective astronaut. I wonder if the project will ever come to fruition?