Staying untypically on-topic, the good folk at Rhizome are doing a series of future fictions under the banner Dystopia Everyday, using the software-dev format of the “user story”. The latest one is “Containers” by Adam Rothstein, and I commend it to your attention:

I woke up at the chime, looked at the mobile. New work available. I clocked in, made coffee, sat at the desk. Two hours of work right away, even before Twitter. Felt accomplished. I invoiced, and collected.

I met Sandra for breakfast. She’s in Miami. She had the ceiling open to let in the sun. She got into a new task queue, editorial work. It’s good work, she said, even though the pay isn’t quite as good as advertising. What’s the difference, I said, sipping my Bloody Mary. Different algorithmic authors, same algorithmic grammar problems.

It’s brief, bleak, and on-point — a great demonstration of the provocative mode in design fiction. I also like the way the user story format reads like a sort of day-job Hemingway, and wonder whether it’s an artefact of the style so much as Adam’s interpretation of it…

BONUS RELATED MATERIAL: how many shipping containers really get lost at sea? Quite a few, it turns out.

I’d expect nothing less than ambition from Honor Harger and her crew at Lighthouse, though; this year’s IR (Thurday 5th September, Brighton UK; map here; tickets here) will be the third instalment of their ongoing mission to bring together artists and writers and designers and futures people with the intent of finding ways to… well, there’s a clue in the title, isn’t there?

And among those others is me.

How did that happen? Well, it had a lot to do with an essay I sent to the good people at Superflux, in which I coined the phrase “infrastructure fiction”. I hope you’ll go read the whole thing (disclaimer: #longread), but I don’t think it’s too much of a spoiler to say that infrastructure fiction was less a new idea than an attempt to encourage people to use the design fiction toolkit on bigger, more tangled problems, such as infrastructure. There are some infrastructure-specific issues involved, of course – and some theory, because I seem these days to produce theory like yeast produces ethanol* – but mostly I was aiming for what in sf criticism we sometimes call the “conceptual breakthrough”: that bit in the story where the characters (and, implicitly, the reader) experience a scalar paradigm shift in how they think about the system of systems that is their world.

That metasystemic perspective fits with IR’s theme this year, so I’ll be talking about it. Do come along if you’re in the area; Brighton in late summer is a glorious place to be, and there’ll be brainfood aplenty. Do come and introduce yourself, too.

Speaking of publications, while I haven’t written more than a handful of poems and scene sketches since handing in my Masters dissertation (the same week as IR2012, funnily enough, which is why I remember going, but don’t remember anything else), I’ve been cranking out a fair bit of academic material. You can find my name on the author list of this paper at Futures, which talks about the project which inspired the notion of infrastructure fiction, and this one at Energy, which further develops one of the ideas from that project. I’ve also got a solo paper on science fiction prototyping sat somewhere in the bowels of the editorial system at Technological Forecasting & Social Change, which was accepted for publication last week, but appears to not yet be in press.

(My academic bibliography already far outstrips my fiction bibliography… though admittedly that’s not much of a challenge at this point.)

I’ve also been speaking at other events, which – to my shame – I never got around to mentioning here before they happened. The wonderful folk at Corporacion Fractal invited me out to Medellín, Colombia where we did something I can only describe as “community design fiction” – an experiment in providing ordinary people with information about new technological developments and then helping them tell stories about it. While it was a lot more intellectually comfortable than playing Talking-Head Authorityguy – I remain convinced there are few if any “experts” on futurity, only people with a strong, dry grip on the right tools for the job at hand – it was hard work; trying to help a crowd of a few hundred people piece together a story about synthetic biology in an everyday context would surely be challenege enough, but doing so through the semantic gauze of live translation raised the bar that much further. Luckily our translator was excellent, and we were having too much fun to notice the hard work bit… and the audience got right into it once they’d sussed out what we were trying to do. Team Fractal are developing an interesting new praxis down there – putting futures thinking into the hands of the people whose futures they might be.

Less glamorously, I’ve read Borges stories to civil engineering conferences (over-reliance on computer modelling is leading to a sort of postmodern crisis in engineering, a flood of signifiers without anything to signify; Borges makes explaining this problem comparatively easy); more glamorously, I was on a panel at the WriteTheFuture conference at the Royal Society on May Day. I’m unwilling to assess the glamour factor of the #stacktivism unconference I spoke at earlier this month (it took place near Hoxton, and thus fell well within the glamour-warping field that ripples through East London like gravity through wet concrete), but it was all politics-of-infrastructure in an old warehouse with high ceilings, an exhibition of nude selfportrait photography and a veritable forest of oddly modular laser-cut plywood furniture.

So, yeah; it’s been quite a year, and we’re still (just) in July. And there’s more on the horizon… which I shall talk about nearer the time, as I get this ol’ battlestation spun up to full power once again. There’s work to be done, ideas to be shared, conversations to have; keep watching the skies.

In the meantime, hope to see some of you at Improving Reality, or elsewhere.

[ * — It’s a by-product of my life-processes which may eventually poison me; this is a strong metaphor. ]

Via Chairman Bruce, the next iteration of design fiction: fictional entrepreneurship.

Fictional Entrepreneurship is the use of design fiction to imagine businesses in order to discover what could be, creating things that are not impossible, but possible, often times derived from utopian, theoretical, and philosophical principles. Fictional entrepreneurship aims to author critical media through the creation of enterprises (imaginary, and real).

While reflecting on this definition, I have come to the conclusion that this concept is in no ways limited within the walls of academia, but can also be executed within a “practical,” corporate culture for the following reasons.

I’m becoming increasingly convinced that science fiction isn’t dying at all; it’s metastasizing. When the world looks like an sf novel, sf is no longer novel.

Related: revisionist entrepreneurship. For instance, what would have happened if MySpace hadn’t been bought by Murdoch’s News Corp?

June 2005. Freston misses his flight. In the airport’s VIP lounge, he spots one of the News Corp M&A team. Freston tears back to his office and hand delivers the letter that completes the deal. Viacom, the owner of MTV, has just bought MySpace for $500m. The deal releases its co-founders, Tom Anderson and Chris DeWolfe, from Intermix, an unspectacular online retailer.

Viacom uses MySpace to redefine itself online. The site needs a complete engineering overhaul, and anything not related to music or entertainment is stripped out. MTV programming, bite-sized interviews, exclusive tracks and live shows are weaved throughout the site. “We want MySpace to keep its hacky, creative ethos,” executives might have said, “while making the site cleaner and less cluttered.”

A little Panglossian, perhaps – I think MySpace was already go-karting down into the trough of disillusionment at that point – but what you have there is a tech-biz journalist picking a comparatively recent and well-documented jonbar point and sketching an alternate history around it. See what I mean? Sf has metastasized; the cultural body is riddled with it, and it’s penetrating to the marrow.

And let’s not forget the increasing ubiquity – and ease of creation – of quasifictional characters, events, organisations, texts… Joanne McNeil of Tomorrow Museum looks at the Web of Misleading Things:

Remember the real reason for Friendster’s decline? It was the ban on “fakesters.” Friendster cracked down on user-created profiles for celebrities, places, and things, instead of embracing it as another slice of the bizarre in the spectacle of social networking. So people moved to Myspace, where non-person identities were encouraged. The site even provided space for bands and filmmakers to upload multimedia.

Now, everybody knew that’s not really Andy Warhol leaving testimonials on your page. But what about that person you know as tiny Twitter avatar? Robin Sage is a particularly interesting example (Quite a number of fictional online identities are in the image of attractive female hackers. I imagine this creates even more tension/skepticism toward women in these communities.)

So long as social media participation requires no public records or birth certificates, we are free to use these services to reinvent ourselves, regardless of what Mark Zuckerberg says.

Is there a more slippery term in the modern word than “real”?

For those of you who don’t follow Warren Ellis’s blog (and you should – it’s worth the risk of the occasional eye-bleaching for the good stuff), go take a look at these mock Lunar banknotes that cropped up on the English Russia site yesterday: 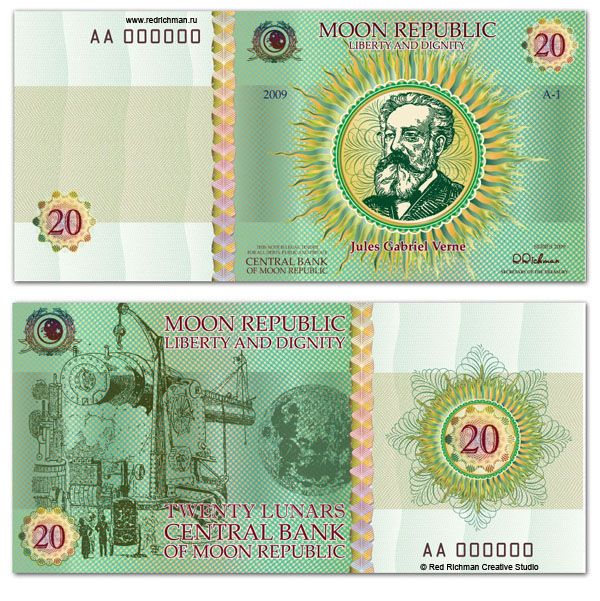 Jules Verne on a banknote; that’s the currency of the future right there…