We mentioned last summer that there was a chance some of the American cities affected worst by the changing economic climate deliberately “downsizing” themselves in order to consolidate what remains and cauterise the wound, and it seems that the decision has been made in the case of Detroit.

With the town already showing signs of becoming a new frontier for hippies, frugalists, art communes and close-to-the-land types, Detroit’s planners are proposing to change roughly a quarter of the city’s ghost-town urban areas into semi-rural farmland [via BoingBoing].

That’s a grim decision to have to make; I think we can assume that it’s being made by people who really can’t see any other way out. Question is, will Detroit be just the first of many? 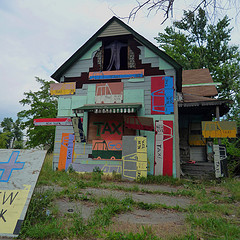 Last time we mentioned Detroit here, it was in the less-than-cheerful terms of it becoming a growth region for private security patrols, and the web is full of similar stories charting the Motor City’s decline in lucid hand-wringing detail. But what if they’re ignoring the positives in favour of those apocalyptic headlines and photos?

Aaron M Renn at New Geography makes the point that the city’s administration seems unwilling to face up to the extent of the problem, but also highlights the pioneering atmosphere that Detroit’s “urban prairie” is nurturing. The withering of local government leaves spaces of opportunity for innovative approaches to low-budget living to take root… and while the living ain’t easy, the make-do attitude of the American pioneer spirit seems to be making a return [via Warren Ellis].

Urban agriculture projects are gathering pace; out-of-town artists are moving in, attracted by the low housing prices and the blank-canvas vibe of a city that’s been all but abandoned by consumerism. [image by jessicareeder]

In most cities, municipal government can’t stop drug dealing and violence, but it can keep people with creative ideas out. Not in Detroit. In Detroit, if you want to do something, you just go do it. Maybe someone will eventually get around to shutting you down, or maybe not. It’s a sort of anarchy in a good way as well as a bad one. Perhaps that overstates the case. You can’t do anything, but it is certainly easier to make things happen there than in most places because the hand of government weighs less heavily.

What’s more, the fact that government is so weak has provoked some amazing reactions from the people who live there. In Chicago, every day there is some protest at City Hall by a group from some area of the city demanding something. Not in Detroit. The people in Detroit know that they are on their own, and if they want something done they have to do it themselves. Nobody from the city is coming to help them. And they’ve found some very creative ways to deal with the challenges that result.

Imagine for a moment that this trend continues – might Detroit become some sort of independent city-state, a mildly anarchic rough-and-ready town where the price of freedom is a willingness to work hard for yourself and with your neighbours? How many more cities in the Western world might go the same way as manufacturing becomes increasingly outsourced overseas and/or roboticised? How will national governments react to these places – will they abandon them to the whims of their new residents, or struggle to control them in the face of diminishing tax revenues and the spiralling costs of law enforcement?

I’m not naive enough to imagine Detroit becoming some sort of hippie utopia, but I think it has the potential to become a new type of post-industrial city – but that will depend on a lot of different factors. Should the government be involving itself more closely in these early stages, or will a hands-off wait-and-see approach prove more effective? 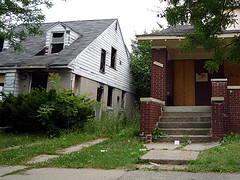