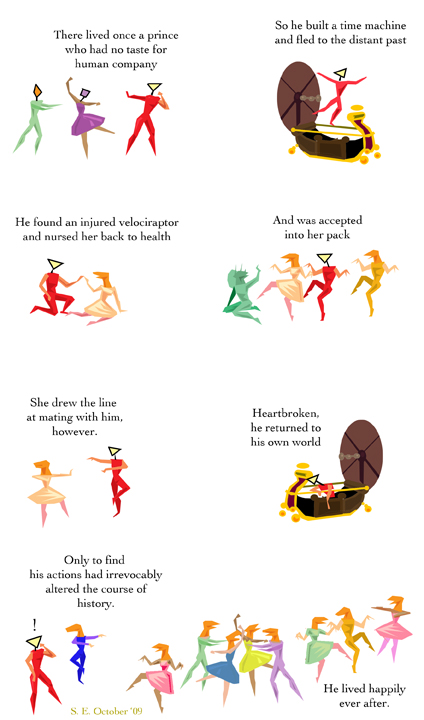 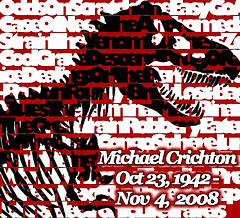 Because even I have a heart, let the record show that Discover lists The Top 5 “Crazy” Michael Crichton Ideas That Actually Came True.

Not all these ideas are exactly original to Crichton.  Still, take that, me.

[Tribute to the author by DML East Branch] 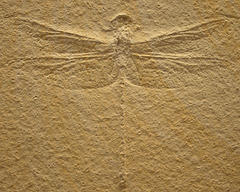 Can you imagine what the extinct birds of millions of years ago looked like? How big were they? Do they look like the birds of today? What colors were they? The first two questions are easily answerable by fossil records, but the third one is a bit more difficult, unless you have a time machine handy. But US researchers believe they’ve come a bit closer to solving the problem:

Writing in the journal Biology Letters, US researchers reveal how ancient feathers found in Brazil displayed “striking” bands of black and white. Previously, fossil experts could only guess at the range of hues exhibited by ancient birds and some dinosaurs.

To find an answer they had to look at behavioural and genetic clues:

There are particular cells that cluster into the dark areas of modern birds called melanosomes. Somehow the melanosomes are retained and replaced during the preservation process and hence you preserve a very life like representation of the colour banding in the fossils.

The Yale team believe they could identify brown, red, buff and even iridescent colours. The technique may be applied to other creatures to reveal the colour of fur or even eyes, the team believes.

This news reminds me of an SF story called The Color of A Brontosaurus, which speculates somewhat on the same subject matter.

Paleontologist Jack Horner has a better way to resurrect dinosaurs than all that tedious mucking about with mosquitoes and blood and amber. Far easier to start with a bird and work backwards. Avian DNA already contains instructions to make tailbones, teeth, scales, and claws. In “Dinosaurs: Return to Life?”, a Discovery Channel documentary, Horner says he would start with an emu, which looks halfway like a velociraptor anyway. A chicken would do in a pinch. (Unfortunately, the show does not seem to be scheduled for rerun anytime soon.)

Has Michael Swanwick written this story yet?

A museum public-relations coordinator for a Texas museum was the first to discover a fossil of a duck-billed dinosaur while touring a dino dig in Montana. A paleontologist says he would have missed it:

I knew enough never to go to a ridge top because you don’t find specimens there. But I forgot to tell that to Steven, so he did exactly that and proved me wrong.