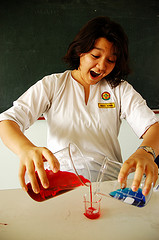 Over at The Guardian, Ehsan Mahsood wonders whether the culture of modern science is stifling the radical thinking and new discoveries that have always been science’s hallmark and driving force:

Revolutions in scientific thinking are always difficult – but perhaps one reason why we may see fewer of them in the future is because of the highly professional way in which modern science is organised. It takes a lot of courage to challenge conventionally accepted views, and it needs a certain amount of stamina to constantly battle those who want to protect the status quo. Mavericks do not do well in large organisations, which is what some scientific fields have become.

Progress in science needs researchers who are not afraid – or who are encouraged and rewarded – to ask awkward and difficult questions of theory and of new data. It is easier to question mainstream views if you are independently wealthy, as many scientists in previous ages tended to be. But I wonder how many of us would do so if we were employed by the state and our career progression depended on the validation of our peers?

Mahsood has a point here; you only have to look at the computer industry to see that the bigger a corporation gets the less likely it is to do something genuinely innovative. But it strikes me he’s overlooking the potential for unaffiliated independent scientists to work together in ways that wouldn’t be funded by cautious or conservative governments or foundations – what about all the DIY biohackers, for example?

Sure, there’s only so much they can do alone, but the internet means they have all the tools they need to network with their fellow enthusiasts, share information, collaborate… so maybe we’re not seeing the end of science as Mahsood would have it, but the end of state-funded science (at least for non-military applications). You could argue that clades of unaffiliated ‘rogue’ scientists would introduce a large element of danger, especially with regard to genetic or viral research… but then state-funded establishments have made their fair share of screw-ups, too, despite (or perhaps because of) the baroque architecture of procedural regulations. [image by neys] 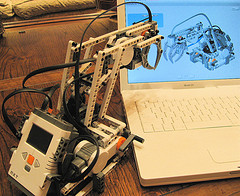 Robots are ideal for doing human tasks that are repetitive, like screwing lids on cosmetic bottles, welding car panels… and now making scientific discoveries. Columbia University’s “Adam” machine is “the first automated system to complete the cycle from hypothesis, to experiment, to reformulated hypothesis without human intervention”.

The demonstration of autonomous science breaks major ground. Researchers have been automating portions of the scientific process for decades, using robotic laboratory instruments to screen for drugs and sequence genomes, but humans are usually responsible for forming the hypotheses and designing the experiments themselves. After the experiments are complete, the humans must exert themselves again to draw conclusions.

They armed Adam with a model of yeast metabolism and a database of genes and proteins involved in metabolism in other species. Then they set the mechanical beast loose, only intervening to remove waste or replace consumed solutions. […]

Adam sought out gaps in the metabolism model, specifically orphan enzymes, which scientists think exist, but which haven’t been linked to any parent genes. After selecting a desirable orphan, Adam scoured the database for similar enzymes in other organisms, along with the corresponding genes. Using this information, it hypothesized that similar genes in the yeast genome may code for the orphan enzyme.

The process might sound simple — and indeed, similar “scientific discovery” algorithms already exist — but Adam was only getting started. Still chugging along on its own, it designed experiments to test its hypotheses, and performed them using a fully automated array of centrifuges, incubators, pipettes, and growth analyzers.

After analyzing the data and running follow-up experiments — it can design and initiate over a thousand new experiments each day — Adam had uncovered three genes that together coded for an orphan enzyme. King’s group confirmed the novel findings by hand.

Score one for the Singularitarians – autonomous systems that can follow the scientific method without supervision would surely be a component of an emergent self-improving artificial intelligence, if I understand the theory correctly. [image by jurvetson]

And why not outsource our more tedious scientific tasks to robot underlings? After all, we’ve been fairly unhesitating in our rush to do the same with warfare… no matter how ethically blurred an idea that may be: