There are a few things worth noting about the latest Wikileaks document-dump, the first and most obvious being how utterly unsurprising (though still deeply saddening) the contents were; for me at least (and I suspect for many others) it’s more of a confirmation of long-held suspicions than anything else.

The second is the reaction from the US and UK governments, which have focussed on the supposed risk to military personnel that the leaks will create; we heard that warning last time, too, and it turned out to be hollow. But it’s proving a very effective distraction to career journalists and their readers, most of whom have overlooked one very telling fact – namely that the aforementioned governments have made no attempt to claim the leaked documents are false. “OK, so we lied… but we were doing it to protect you!” Oh. That has worked out well, hasn’t it?

Thirdly is an observation from Mike Masnick of TechDirt, who compares Wikileaks with everyone’s favourite internet-prankster boogiepersons, Anonymous. The common themes are that they’re both products of our newly-networked era, and that they’re both being underestimated by the very powers that they most threaten.

I’d argue that the time to take the concept of Anonymous seriously came quite some time ago, actually. Even as people dismiss the group as often immature and naive (at times, quite true), what’s impressive about it is that Anonymous is a perfect example of truly distributed, totally anonymous, ad hoc organizations. When the group puts out statements, they’re grandiose and silly, but there’s a real point buried deep within them. What the internet allows is for groups to form and do stuff in a totally anonymous and distributed manner, and there really isn’t any way to prevent that — whether you agree with the activity or not.

Some think that “a few arrests” of folks behind Anonymous would scare off others, but I doubt it. I would imagine that it would just embolden the temporary gathering of folks involved even more. Going back to the beginning of the post, if the US government really was effective in “stopping” Julian Assange, how long do you think it would take for an even more distributed group to pick up the slack? It could be Anonymous itself, who continues on the tradition of Wikileaks, or it could be some other random group of folks who believe in the importance of enabling whistleblowing.

And yes, there’s a smattering of self-aggrandisement on my part here, because I made a similar suggestion back in July:

It’ll never be a big-bucks business, I’d guess, but the accrued counter-authority power and kudos will appeal to a lot of people with axes to grind. But what if they manage to make it an open-source process, so that the same work could be done by anyone even if Wikileaks sank or blew up? An amorphous and perpetual revolving-door flashmob, like Anonymous without the LOLcats and V masks? It’s essentially just a protocol, albeit one that runs on human and electronic networks in parallel.

Nowadays I flinch from making bold statements about profound change, but I find it very hard not to look at distributed post-geographical movements like Wikileaks and Anonymous and not see something without historical precedent. Whether it will last (let alone succeed in toppling the old hierarchies) is an open question that I’d not want to gamble on just yet, but what’s pretty much undeniable is that the nation-state is under attack by a virus for which its immune system has no prepared response. 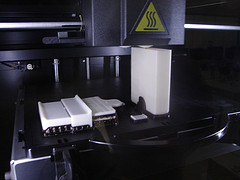 As Cory Doctorow’s new novel Makers is being serialised over at Tor.com, reality seems to be doing its best to catch up with the ideas he’s based it upon.

Fabbaloo points us to the 100kGarages.com project, a collaboration between citizen-fabbing startup Ponoko and the CNC router company ShopBot that aims to distribute the actual printing-out of people’s designs to a network of small “garages” – small local shops with the necessary hardware to handle the designs as developed by customers at Ponoko. [image by CabFabLab]

These new technologies make practical and possible doing more of our production and manufacturing in small distributed facilities, as small as our garages, and close to where the product is needed. Most importantly our new methods for collaboration and sharing means that we don’t have to do it all by ourselves … that designers with creative ideas but without the capability to see their designs become real can work with fabricators that might not have the design skills that they need but do have the equipment and the skills and orientation that’s needed to turn ideas into reality … that those who just want to get stuff made or get their ideas realized can work with the Makers/designers who can help them create the plans and the local fabricators who fulfill them.

To get this started ShopBot Tools, Makers of popular tools for digital fabrication and Ponoko, who are reinventing how goods are designed, made and distributed, are teaming-up to create a network of workshops and designers, with resources and infrastructure to help facilitate “rolling up our sleeves and getting to work.” Using grass roots enterprise and ingenuity this community can help get us back in action, whether it’s to modernize school buildings and infrastructure, develop energy-saving alternatives, or simply produce great new products for our homes and businesses.

There are thousands of ShopBot digital-fabrication (CNC) tools in garages and small shops across the country, ready to locally fabricate the components needed to address our energy and environmental challenges and to locally produce items needed to enhance daily living, work, and business. Ponoko’s web methodologies offer people who want to get things made an environment that integrates designers and inventors with ShopBot fabricators. Multiple paths for getting from idea to object, part, component, or product are possible in a dynamic network like this, where ideas can be realized in immediate distributed production and where production activities can provide feedback to improve designs.

100kGarages admit that, yes, it’s a smidgen technoutopian, and it’s also an experiment – but the notion of seeding a grassroots manufacturing infrastructure seems to be not just timely but eminently plausible. Might plans like this will provide the much-needed sea-change necessary to rescue the US economy and set it on a path to long-term stability?