Tian cites the recent cloning of the entire genome of a single bacterium, which took more than four years to complete and cost more than $40 million, as an example of the drawbacks of current technology. The new chip system would have reduced that to a small fraction of the time and expense, Tian says.

Gene synthesis involves a number of steps, including synthesis, purification, and assembly of oligonucleotides or oligos, short snippets of DNA, usually less than 50 base pairs. Each of these steps currently takes one to two days to complete. The new chip performs all three of these activities.

The chip itself has row upon row of tiny indentations, or wells. The biochemical equivalent of an inkjet printer shoots the desired DNA bases into each well. The bases assemble within the well and since it is a enzymatic reaction, harsh chemicals are not needed to release the DNA strand, as it done now, from the walls of the well.

“The chip basically combines the three steps into one, which can be completed in less than two days, and without all the labor currently needed,” Tian says. “Also, since the wells are so small, significantly smaller amounts of expensive chemicals are needed to run the reactions.”

Via Lauren Beukes comes the news that Canadian poet Christian Bök has thought of a way to transcend Keats’ epitaph of being “one whose name was writ on water”; he seeks a poetic immortality that could outlive the human species itself, by the expedient of encoding some of his work into the DNA of a hardy strain of bacteria.

… it’s a tricky procedure, and Bök is doing what he can to make it even trickier. He wants to inject the DNA with a string of nucleotides that form a comprehensible poem, and he also wants the protein that the cell produces in response to form a second comprehensible poem.

You can’t fault the guy’s ambition. Who knows – his work might be rediscovered in some nigh-unimaginable future where interest in poetry hasn’t withered away to nearly nothing.

Then again, maybe it’ll stage a comeback – Damien Walter argues that the social media era is ideally suited to poetry’s narrative and expressive concision. I’d very much like to see it happen… but I’ll not hold my breath just yet. 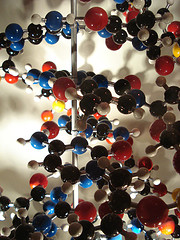 Genetic engineering and DNA sequencing are regular features in our news posts here at Futurismic, and in many other venues much less explicitly future-focussed. The technology of life’s tiny building blocks is steadily becoming ubiquitous – hell, you can even buy a DNA synthesizer on eBay [via Paul McAuley] – but it’s still a pretty hardcore scientific discipline, one that takes years of study and research to fully understand.

Luckily for us curious laypersons, Ars Technica is running a series of articles aiming to explain the basics of genetic science in terms that we should be able to grasp – though a basic high-school level understanding of science is probably still a prerequisite to get the best out of it. The first instalment is all about the basic principles of DNA sequencing – the underlying ideas that the latest and greatest methods are built upon. Some of the diagrams and chemical names might be a bit intimidating, but it’s a well-written piece and worth persisting with if you’re genuinely curious about how it all works. [image by net_efekt]

I’ve recommended Jan Chipchase’s Future Perfect blog before as a great source for near-future speculation with a street-level twist, and it looks like it’s time I did so again. Chipchase has just purchased one of the $99 DNA testing kits from 23andme, inspiring the following thoughts:

With an increasing number of medical and judicial proceedings pulling on DNA data and a continious trickle of whose-the-father paternity testing DNA is slowly but surely moving mainstream. Who’ll be the first to take individual’s DNA data and mash it up with dating profiles? Nature versus nurture? Bring on the hucksters.

The rise in adoption/use of DNA is particularly interesting because it affects people, families deeply and retrospectively. Your dad for the last 40 years? He’s not, y’know. (For source stats head over to Measuring paternal discrepancy and its public health consequences by Mark A Bellis et al. – they cite ~0.8% to 30% paternal discrepancy, median 3.7%)

Roll forward 20 years when you can obtain a DNA test for the cost of a packet of gum – hell, it might even come in the form of a stick of ‘DNA Brand’ gum where the consumer is encouraged to spit out and stick after use.

Can you think of any Gibsonian street uses for ubiquitous affordable DNA testing? [image by ynse]