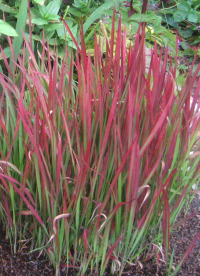 Battle-lines are being drawn down in Alabama for a $6million war against an alien invader. It’s tough, burns only at very high temperatures and almost completely inedible by natives… it’s cogongrass, the “Perfect Weed”, and if it’s not stopped it could wreck the ecosystem as well as regional agriculture. [via SlashDot; image from Wikimedia Commons]

The story of cogongrass follows the familiar science-fiction theme of humankind reaping what it has sown, through arrogance, stupidity or some other frailty. Conduct nuclear testing, say hello to mutants. Be careless with nonnative species, say hello to cogongrass.

It is believed that in the winter of 1911-12, shipments of satsuma orange rootstocks from Japan arrived in Grand Bay, about 25 miles south of Mobile. And what was being used as packing material for these shipments? Cogongrass, of course.

For a while, government officials encouraged the use of cogongrass as a forage crop and as a way to stem soil erosion. These efforts failed, a state document says, and “the plant unfortunately was allowed to escape” — across southern Alabama, into Florida, Mississippi, and beyond.

Now, come springtime, you can see its white feathery tufts, surrendering seeds to the wind. Come summer, the yellow-green blades can rise six feet high. Then, during winter, the grass turns brown but often remains erect, as if in defiance.

Despite the slightly comical framing of the story, it’s a serious matter – one of a type that will likely become more prevalent rather than less. We’ve mentioned before that evolution moves faster when the pressures are stronger… and the cogongrass isn’t just competing with local plants but with the people trying to stop it, not to mention climate change.

It’s a bit of a lame apocalypse from a fictional point of view, but what if civilization ground to a standstill fighting a war of containment against relentless non-sentient vegetable enemies?