Depending on how you look at it, this is either a harbinger of the emergent-model AI Singularity or a demonstration of the specious voodoo underpinnings of the automated financial markets… possibly both, if you’re a real pessimist [via Kottke.org].

A couple weeks ago, Huffington Post blogger Dan Mirvish noted a funny trend: when Anne Hathaway was in the news, Warren Buffett’s Berkshire Hathaway’s shares went up. He pointed to six dates going back to 2008 to show the correlation. Mirvish then suggested a mechanism to explain the trend: “automated, robotic trading programming are picking up the same chatter on the Internet about ‘Hathaway’ as the IMDb’s StarMeter, and they’re applying it to the stock market.”

Companies are trying to “correlate everything against everything,” [Bates] explained, and if they find something that they think will work time and again, they’ll try it out. The interesting, thing, though, is that it’s all statistics, removed from the real world. It’s not as if a hedge fund’s computers would spit the trading strategy as a sentence: “When Hathway news increases, buy Berkshire Hathaway.” In fact, traders won’t always know why their algorithms are doing what they’re doing. They just see that it’s found some correlation and it’s betting on Buffett’s company.

Now, generally the correlations are between some statistical indicator and a stock or industry. “Let’s say a new instrument comes to an exchange, you might suddenly notice that that an instrument moves in conjunction with the insurance sector,” Bates posited. But it’s thought that some hedge funds are testing strategies out to mine news and social media datasets for other types of correlations.

Crazy, right? Well, irrational on one level, perhaps, but those trading algos are big (bad) business: remember the guy who was accused of stealing some algo code from Goldman Sachs? Eight year stretch [via BoingBoing].

In a move that is somewhat unusual for a videogame column, I would like to ask you to consider not a game or a development in the gaming industry but a film… and not just any film, but an obscure art house film. 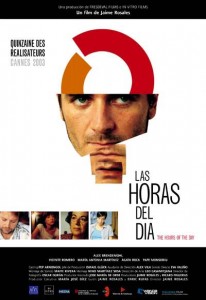 Jaime Rosales’ The Hours of the Day (2003) (a.k.a. Las Horas Del Dia) tells the story of Abel.  Abel lives with his mother and operates a decidedly unglamorous clothing shop in a run-down part of town.  He has a low-intensity relationship with his girlfriend who wants them to move in together, he has a passive-aggressive relationship with his shop assistant who wants more severance pay than Abel can afford and he has a rather tense friendship with another man who wants him to invest in a marketing project.

Though these relationships dominate Abel’s life, he is distant from all of them; he bickers with his mother, he sabotages his girlfriend’s attempts to find them a flat and he ruins his best friend’s wedding day by casually revealing that the bride once made a pass at him.  In all of his dealings, Abel comes across as weirdly detached and disconnected, as though the human world is somehow beyond his comprehension.  This disconnection from every-day social reality makes Abel almost impossible to understand.  We do not understand why he sabotages his relationships and we certainly do not understand the savage murders that Abel carries out seemingly at random throughout the film.  Because Abel’s motivations are so completely impenetrable, it is remarkably difficult to extract anything resembling a human drama from the events depicted in The Hours of the Day.  The film does not appear to be a comment upon unhealthy relationships or the absurdity of existence or even a portrait of one man’s descent into madness.  It is simply a series of events presented in chronological order.  Stuff happens. END_OF_DOCUMENT_TOKEN_TO_BE_REPLACED

Via the Anarcho-Transhumanism blog, here’s an interesting article that examines Somalia’s fate since the fall of Siad Barre’s dictatorship in 1991, and which points out that – despite a lack of central governance – Somalia’s economy has actually improved somewhat:

It is hard to call any country mired in poverty an economic success. Yet by most measures Somalia’s poverty is diminishing and Somalia has improved living standards faster than the average sub-Saharan African country since the early 1990s. In that sense Somalia is at least a relative success story. The most interesting part of Somalia’s success is that it has all been achieved while the country has lacked any effective central government.

For many, the “A” word—anarchy—conjures up notions of chaos. For others it simply means the absence of a single government ruling a geographic area. In this second sense, Somalia has been in a state of anarchy since the fall of Siad Barre’s dictatorship in 1991. The result has been, in general, economic development rather than chaos—although there certainly have been chaotic periods. The interesting questions are how has development been promoted and what has caused the chaos.

Although they are a concern, this is not merely a symptom of a “failed state,” as many media reports make it out to be. In one sense, that the piracy is committed against passing foreign vessels is a tribute to the internal effectiveness of Somali customary law. The pirates are well-armed and obviously not hesitant to use violence. Yet they do not plunder Somali ships. What’s more, they interact peacefully with other Somali when they are on land. Although the total number of pirates is small, it has been estimated that 10,000 to 15,000 people are employed by the pirates indirectly in related industries such as boat repair, security, and food provision. (Other enterprising Somalis have set up special restaurants to cater to the hostages.) That pirates use voluntary market transactions to purchase goods and services on land, rather than pillage, provides some evidence that Somali law is fairly robust if even these otherwise violent people respect it when conducting their internal affairs.

Now, neither I or the authors of that article are suggesting that life in Somalia is a basket of peaches, or that a collapse of central governance is de facto a good or desirable thing. But the figures and social phenomena discussed would certainly suggest that a state of political anarchy doesn’t necessarily have to lead to a Hobbesian ‘natural’ lifestyle, and that systems for managing conflict and economics have a way of emerging from the bottom up.