Experience teaches that writing a convincing near-future sf story is not easy–let alone convincing editors that you are not writing satire–but this really struck a writerly nerve: “Most Americans can’t imagine a future that’s not pretty much like the recent past, maybe with a few wind turbines and solar panels added.”

Jon Talton used to write for The Arizona Republic. Now, as Rogue Columnist, he writes stuff his old bosses wouldn’t tolerate. (He’s published a decent series of crime novels set in AZ, too.) His columns sometimes read like jeremiads, but in the spirit of a couple of Paul’s recent posts about the future of the American empire, here are some snippets from Jon’s latest.  What the hell; it’s Friday the Thirteenth.

I can see a few other outcomes:

1. The man on the white horse. When chaos reaches a certain level most people will eagerly embrace, say, Gen. David Petraeus. He’s shown little MacArthurism in him. But if both political parties and most institutions have lost legitimacy, the military might be forced by events to step in. Or the elites, desperate to save their bacon, might draft this universally admired soldier as president. The move might gain further power as thousands of discharged combat veterans drive the streets of America unable to find work. This will be our Rubicon moment….

[Blogger’s rude interruption: I’m reliably informed that Americans love it when John Wayne rides in to save the day, and in fact many believe it happens on a regular basis, perhaps recently.–Desultorily Philippic Tom]

3. Devolution. This would be another orderly way for a bankrupt and hamstrung federal government to accept reality, particularly if faced with ever greater instability and gridlock. Keep control of national defense, foreign policy, the constitutional basics. And leave the rest to the states, including most taxing and regulatory authority. If Arizona wants to be a law-of-the-jungle toxic dump where the devil takes the hindmost, see how that works out….

4. War with China. …China is happy to watch America exhaust itself in the Muslim world, hoping that will do the trick, leaving America to do a sudden global withdrawal as Britain did. But conflict is not impossible to imagine. If it happened, any of the above scenarios might face a losing America. A greater, if fleeting, imperial moment might await a winning America. But it won’t be the America we once knew.

5. Muslim revenge. The longer we intrude in the Middle East and Afghanistan, keeping armies there, depending on oil from dictatorships, allowing an intransigent Israel to do as it wishes, playing with fire in Pakistan and ignoring all those millions of angry, unemployed young men — the closer we get to a horrific reckoning.

None of this may happen. I certainly don’t want it to happen. But these outcomes are no longer out of the question.

Agree or not, Jon raises issues that sf might arguably and legitimately deal with. Hmm, what was the exact date the world began to look towards China, rather than the U.S., for leadership out of the recession? Am I just a jingoistic ignorant might-as-well-be-a-klansman for even asking if that’s a good or bad thing?

Things are changing pretty fast, has anybody noticed? The author of Russian Spring, with its early cover painting of the Lenin statue greening over, might do a William Windom Star Trek turn: “Don’t you think I know that?!?!” How would a book like Stand on Zanzibar, which I read till it fell apart in my turbulent twenties, read today? (I’ll let you know if I ever track down a copy.) It would be interesting to see stories about how some of Talton’s speculations can be avoided. 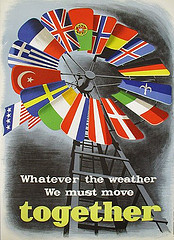 Martin Börjesson has just been re-reading Asimov’s famous Foundation Trilogy, and found himself wondering whether the books are any use as a way of reframing the current global situation with regard to economics and geopolitics.

Here it is worth noting that the main inspiration too this novel, which started as a series of short stories by a 22 year old Asimov, published from 1942 and forward, came from Gibbon’s famous work “The History of the Decline and Fall of the Roman Empire”. When I see it in this perspective I can’t avoid thinking of the role of the monasteries which worked as knowledge capsules during the dark ages.

What does Dr Seldon say about what causes the fall of the Empire:

And the effects will be:

Do these bullets sound familiar?

Well, of course they do; the ways that big systems collapse are well-known to historians and science fiction writers alike; it’s the political types and economists who seem to have the wilful blind spot in this case.

Can books like Foundation help us see things more clearly? Sure – if you’re the sort of person who’s willing to look for those analogies and think them through for yourself. As a tool to bring the message to the masses, though, I doubt they’re of any greater utility than a celebrity cook-book. [image by draXus]