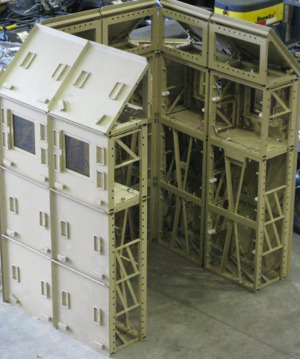 … an armored wall system known as McCurdy’s Armor could have Marines rapidly erecting 6.5-foot-tall mortar-, RPG- and bullet proof fortresses in less than an hour, saving the days it can take to fortify an area by conventional means and making forward-operating units more nimble.

Named for Ryan S. McCurdy—a Marine killed in Iraq in 2006 while hauling a wounded comrade to safety—the system is designed to offer troops increased protection and mobility when setting up outposts in hostile areas. The walls can be ferried into place in panels that are easily stackable in a truck or trailer. Once in position, four Marines can assemble a single panel in less than ten minutes without any special tools or additional equipment. The panels then snap together like bomb-proofed Legos secured with steel pins to form a blast- and bullet-proof shelter.

Neat idea. Also an easily-copied technology; given its lo-fidelity nature, budget clones (weaker armour, cheaper materials) of this stuff will pop up everywhere and anywhere there’s a use for it.

Also easily re-used by one’s opponent; likely to dot post-conflict landscapes for years to come, be repurposed as housing material or weld-on armour for vehicles. The street – or the valley, or the high pass, or the desert – finds its own use for things. What would you use it for?