Professor Henry Greely reckons it’s high time (arf!) that we stopped trying to ban cognitive enhancement drugs and focus our attentions on developing rules governing their use [via SentientDevelopments]. It’s a pragmatic approach; as Greely points out, the current grey legality of “revision drugs” like Ritalin isn’t doing anything to stop their use, and as the pharmacological industry introduces more cognition-boosting chemicals onto the market (albeit ostensibly as treatments for various maladies of the mindmeat), that situation is unlikely to reverse itself.

Of course, lots of people are scared of the idea of brain enhancement, and there are some good reasons for that. But there are also some bad (or at least illogical) reasons. take it away, Mr Greely:

There are at least three unsound reasons for concern: cheating, solidarity, and naturalness.

Many people find the assertion that enhancement is cheating to be convincing. Sometimes it is: If rules or laws ban an enhancement, then using it is cheating. But that does not help in situations where there are no rules or the rules are still being determined. The problem with viewing enhancements as cheating is that enhancements, broadly defined, are ubiquitous. If taking a cognitive-enhancement drug before a college entrance exam is cheating, what about taking a prep course? Using a computer program for test preparation? Reading a book about taking the test? Drinking a cup of coffee the morning of the test? Getting a good night’s sleep before the test? To say that direct brain enhancement is inherently cheating is to require a standard of what the “right” competition is. What would be the generally accepted standard in our complex and only somewhat meritocratic society?

The idea of enhancement as cheating is also related to the idea that enhancement replaces effort. Yet the plausible cognitive enhancements would not eliminate the need to study; they would just make studying more effective. In any event, we do not reward effort, we reward success. People with naturally good memories have advantages over others in organic chemistry exams, but they did not work for that good memory.

Some argue that enhancement is unnatural and threatens to take us beyond our humanity. This argument, too, suffers from a major problem. All of our civilization is unnatural. A fair speaker could not fly across a continent, take a taxi to an air-conditioned auditorium, and give a microphone-assisted PowerPoint presentation decrying enhancement as unnatural without either a sense of humor or a good argument for why these enhancements are different. Because they change our physical bodies? So do medicine, good food, clothing, and a hundred other unnatural changes. Because they change our brains? So does education. What argument justifies drawing the line here and not there? A strong naturalness argument against direct brain enhancements, in particular, has not been—and I think cannot be—made. Humans have constantly been changing our world and ourselves, sometimes for better and sometimes for worse. A golden age of unenhanced naturalness is a myth, not an argument.

I’m guessing that most readers here are open to the idea of cognitive enhancement (by whatever method)… but even so, what’s the most compelling argument you’ve heard against it? 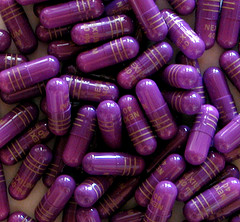 OK, hypothetical question – let’s say you could pick any personality trait to be chemically enhanced. Which aspects of your personality would be in the top three? [image by Tom Saint]

According to a recent study, you’re most likely to be willing to tweak the parts of your psyche that you don’t consider fundamental to to your identity as a person – your ability to concentrate, for example, or maybe the number of hours of sleep you need each night. [via FuturePundit]

Human enhancement drugs are still very much in their infancy at the moment; to draw an analogy, many people were pretty leery of plastic surgery when it was first becoming more commonplace. So I suspect that we’ll see the ‘early-adopter’ pattern with more drastic enhancements, with artists, outcasts and other pioneers of the psyche venturing out beyond mere ‘cosmetic’ cognitive enhancement… after all, think how useful it would be to become autistic for a week.