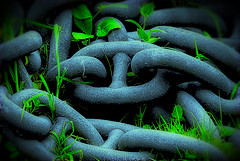 The British government has given the go-ahead to a new generation of coal-fired power plants incorporating carbon-capture and storage technologies in a bid to reduce carbon dioxide emissions. Clean coal has been met with criticism and the policy seems just a little bit flaky:

Up to four new plants will be built if they are fitted with technology to trap and store CO2 emissions underground.

The technology is not yet proven and would only initially apply to 25% of power stations’ output.

Green groups welcomed the move but said any new stations would still release more carbon than they stored.

Once it is “independently judged as economically and technically proven” – which the government expects by 2020 – those stations would have five years to “retrofit” CCS to cover 100% of their output.

Kind of a glass quarter-full situation then. And it might not even work. But do check out the details.

[image and articles from the BBC and the Guardian] 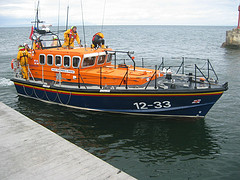 James “Gaia Theory” Lovelock suggests that there may be as few as one billion human beings left in 100 years time:

Lovelock’s point seemed to be that we should give up on trying to save the planet and the entirety of the human species by reducing greenhouse gas emissions and focus instead on equipping “lifeboat nations” with the necessary infrastructure (schools, roads, houses) to support swarms of climate refugees.

The UK and Canada are lifeboat nations, in case you’re wondering. Probably Siberia too. Basically, anywhere that will be relatively cool and have water in a world that is on average 5°C warmer than it was 100 years ago.

Which sounds interesting and… controversial. The suggestion that places like the UK and Canada should massively overinvest in infrastructure over the next few decades may be be Quite A Good Idea in any case (fiscal stimulus, anyone?).

But is this giving up too soon? 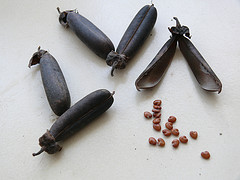 The futuristic facility, with its low-slung steel and glass structure over the vaults, is seen by scientists as an insurance policy against nature and human folly. It is a quiet place, where young scientists in white smocks spend hours cleaning seeds by hand, using microscopes, scalpels, forceps, and tiny brushes.

A splendid concept is being pursued to manipulate the roots of trees to create useful structures:

Pilot projects now underway in the United States, Australia and Israel include park benches for hospitals, playground structures, streetlamps and gates. “The approach is a new application of the well-known botanical phenomenon of aerial root development,” says Prof. Eshel. “Instead of using plant branches, this patented approach takes malleable roots and shapes them into useful objects for indoors and out.”

A company called Plantware is developing these, and similar methods, to create a wide variety of tree-based items. In addition researchers from Tel Aviv University are developing other environmentally friendly ideas:

Prof. Eshel’s team is also working on a number of other projects to save the planet’s resources. They are currently investigating a latex-producing shrub, Euphoria tirucalii, which can be grown easily in the desert, as a source for biofuel; they are also genetically engineering plant roots to ensure “more crop per drop,” an innovative approach to irrigation.