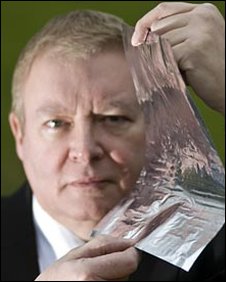 Following on from yesterday’s thin ‘n’ see-through supercapacitors now we have thin ‘n’ shiny speakers from researchers at Warwick University:

Engineers claim their new ultra-thin speakers, as well as looking good and being easy to conceal, will also deliver clearer, crisper sound.

The loudspeakers could replace public address systems in passenger terminals and shopping centres.

They could also be used as speaking posters to deliver adverts.

A team of chemist-entrepreneurs says it has developed a photonic ink (“P-Ink,” unfortunately) that changes color with the addition of a few volts of electricity.

Electronic inks are already used in commercial products such as Amazon’s Kindle reader. Most current technologies use an electric field to manipulate drops of oil or pigment particles. The presence or absence of a voltage makes pixels on the display appear light or dark, and most displays are confined to monochrome. P-Ink, however, can display any colour without using pigments. Instead, it relies on the same effect that generates shimmering colours in the semi-precious stone, opal.

(If you’re having Roxy Music flashbacks now, me too.)

(Large friendly letters on the cover from BBC) 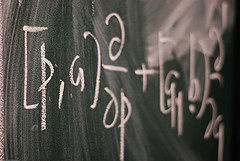 The technology is based on a process called electrowetting, which uses electricity to manipulate a thin layer of liquid so that it changes colour. It uses far less power than a traditional liquid crystal display (LCD) and, crucially, the individual cells change fast enough to run video.

Newspaper editors, grappling with declining circulation and the migration of advertising spending to the internet, have been hoping for years that e-paper will move beyond the drawing board into reality. The dream is for a device allowing readers to upload the newspaper in the morning, then update editorial content and ads as the day goes on, perhaps using a mobile phone or wireless connection.

I wonder if epaper-newspapers will be one of those technologies, like videophones or vitamin-pill-meals, that become technically feasible but never really take off commercially?

Think about it: you get a free paper-paper on the bus every morning and free news content on the web at work or on your laptop.

Also if devices like Microsoft’s Surface (corporate video) become ubiquitous then why bother carrying around a sheet of plasticky stuff when every table, wall, and counter has an interactive Internet-linked display?

I think it will be around as a technology, but I don’t think it will “save the newspaper” any more than wireless laptops or mobile phones will.

The issue is how you monetise content creation – rather than how it is displayed and delivered to the consumer. 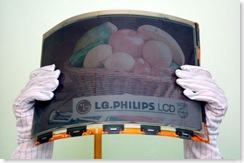