Here’s a proper science fictional “what-if?”, via the ever-reliable MetaFilter, where the brilliant slug-line “software for your wetware” was applied: is it possible to exploit the biological computation power of our visual apparatus to deal with tasks that we find difficult at a cognitive level? Or, to put it another way: can we set up the brain to act like a processor that uses complex visual stimuli as a form of program?

Or, even more simply: can we make diagrams that, when looked at, produce a certain computational output in our minds?

Yeah, I know, it sounds a bit crazy… but Mark Changizi sure comes across like he knows what he’s doing.

The broad strategy is to visually represent a computer program in such a way that, when one looks at the visual representation, one’s visual system naturally responds by carrying out the computation and generating a perception that encodes the appropriate output to the computation. That is, there would be a special kind of image that amounts to “visual software,” software our “visual hardware” (or brain) computes, and computes in such a way that the output can be “read off” the elicited perception.

Ideally, we would be able to glance at a complex visual stimulus—the program with inputs—and our visual system would automatically and effortlessly generate a perception that would inform us of the ouput of the computation. Visual stimuli like this would not only amount to a novel and useful visual notation, but would actually trick our visual systems into doing our work for us.

And the visual stimuli he’s on about [image borrowed from linked article]? 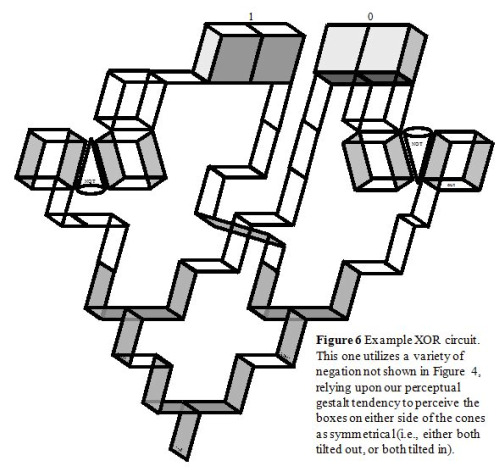 Well, that elicited a few cognitions from my brain… though I’m not sure that any of those cognitions are particularly useful.